The battle of Sega versus EA is one of the most prized fights in sports video games. You'll encounter factions of enthusiastic supporters of Madden, and likewise for the ESPN/NFL2K series. While critics usually lean toward the ESPN games for their technical superiority and presentation, Madden has always been the victor with regard to sales. 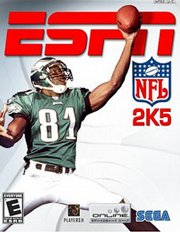 Now, in a stunning jab to the groin, Sega releases its current ESPN NFL 2K5 at a ridiculous retail price of $19.99, thirty dollars less than Madden. Not only that, but it gets a three-week jump on EA's competitor. Fans were quick to wonder if they'd still get a robust feature update as usual or if the price meant they'd have to settle for a lesser product.

The result is downright scary. Although I haven't put Madden 2005 through its paces yet, ESPN NFL 2K5 has to be the best football game I have ever played.

From boot up to trophy presentations, ESPN-ness oozes from every pore. Chris Berman delivers his best from the Sportscenter desk, introducing the teams with his trademark flair. Even at the half, you are treated to a highlight show reel as Berman recaps the best plays of the half...and you see it from the most realistic camera angles. (Note: Unfortunately PS2 owners must own the optional hard drive for this presentation perk.) Remember how real the player animations looked from afar last year? Well that has improved even more, if you can believe it. While Madden retains an obvious video game look, ESPN NFL will cause many-a double-take, inspiring such comments as "is this real, or..."

Okay, okay...but how does it play? It plays basically the same. You don't fix what's broke. Period. There have been tweaks to defensive line set-ups, juke animations and character abilities that really take major steps toward how the real players react. Play-changing and calling are very intuitive. The new Maximum Tackle system lets you choose how you tackle an opponent (wrap or smash.) Leading a receiver is easy to perform. First-Person football is still there for those who want the total immersive experience. There are endless amounts of customizations you can make to your team and many ways to play.

The new V.I.P. system is particularly intriguing. It automatically records how you play, who you play and why. It keeps this in your V.I.P. profile, so when you want to play a friend and they aren't there, you can play against their V.I.P. profile which will play like your friend does. It's frikkin' brilliant.

The Crib returns, that place where you can collect various icons, trophies, music and more by earning Crib credits for performing various tasks along the way. The online experience is really smooth, one game or league play. Neither platform experiences any major difficulty pulling off a seamless experience for the worldwide leaderboard.

The game tends to have some framerate dips in odd places during the game on both systems. It's not major, but it's noticeable. Other than that, the stadiums, character models and realistic lighting and shadowing are superb. Visual Concepts has this down to a science. The sound is also clear and intense. The line of scrimmage banter from the players does sound oddly compressed and fairly unnatural, but the word matching and commentary more than make up for that small detail, delivering noticeably seamless and entertaining guidance from the booth.

I am stunned. This game is amazing. I can't believe it's only 20 bucks. Buying ESPN NFL 2K5 is a no-brainer. Convincing yourself to plop down $50 for its competitor has never been so hard.