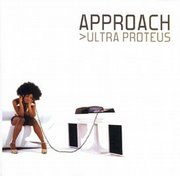 When local MC/funk guru Approach released "Ultra Proteus" in 2002, the album was one of the most exciting releases on the local scene. With its organic blend of hip-hop, funk and nu-soul sounds, "Ultra Proteus" brought a fresh take to Lawrence hip-hop. Crowds and b-boys took notice, packing local clubs to see this energetic MC and his funky live band.

Thanks to a worldwide deal with New York's Coup d' Etat Records (also home to MC Paul Barman, J-Live and Akrobatik), "Ultra Proteus" is getting a second wind. The album has new artwork, three new songs and five remixes. The fidelity of the recording is sharper thanks to a remastering job by Ed Hickey at Lawrence's Neighborhood Studios. And maybe the most notable difference, Proli's vocals are brought to the fore (instead of remaining just another instrument in the mix), putting his wit, wisdom and lyricism in the spot where it belongs.

All of which would be meaningless, of course, if "Ultra Proteus" wasn't such a funky album in the first place. The original album's 10 cuts featured a who's who of local musicians that helped put a unique stamp on Approach's vision: a supreme funk party enlightened by positivity and consciousness.

While the original album stood on its own, the re-release does offer a few incentives to give it another go. New tracks "Al Japro" and "Say Anything" stand alongside anything on the original album, and an interlude by local rapper Joe Good (Sounds Good) offers a few kicks (albeit only a minute's worth).

The remixes range from engaging to frivolous, with NASA's reworking of "The Opus" and Automato's "Slide Back (Straight No Chaser)" standing out amongst the pack. The Rondo Brothers' take on "Funk Reaction" subtracts more than it adds, while OhNo's "Al Japro" just lacks punch.

Even though the first release was completely pro, this release finds ways to improve on it. Hopefully the world will catch on quick so Approach can bag some dough and cut some new tracks.