Vin Diesel is back, four years after originating the role that made him an up-and-coming action hero. He plays Riddick; a loner, Dottie, a rebel. He's a simple man, like Pee-Wee Herman, who is not concerned with getting the girl. But, unlike Pee-Wee, poor Riddick doesn't even have a bicycle for companionship.

This movie's predecessor, 2000's "Pitch Black," was never designed to have a big-budget sequel. It was a modest sleeper hit that scared audiences the old-fashioned way: by preying on peoples' fear of the dark. Diesel's anti-hero Riddick had infrared vision, making him the only person who can see the menacing creatures that came out only at night. His mysterious past as an escaped murderer and his penchant for spewing corny macho attitude sealed his fate as an anti-hero.

Just as its predecessor was a wolf in sheep's clothing, so is "The Chronicles of Riddick." By design, it's an amalgam of "Star Wars," "Conan the Barbarian," and the "Indiana Jones" series, only not nearly as exhilarating as any of the above. "Riddick" is basically a shoot-'em-up action picture dressed up in futuristic attire.

In order for Riddick to go from supporting player to carrying a movie of this magnitude, it was important to expand his mythology. In addition to being the probable last survivor of the Furion race, Riddick is also prophesized to be the one who will kill Lord Marshal (Colm Feore) of the Necromongers, a brainwashed race hell bent on conquering planets. The Necromongers aren't as scary as the spider-like creatures of "Pitch Black," but they can pull out one's soul and show it to you before you die.

Vin Diesel is back, four years after originating the "Pitch Black" role that made him an up-and-coming action hero. He plays Riddick; a loner, Dottie, a rebel. Diesel is a little Han Solo, a little Pee-Wee Herman, and a whole lot Schwarzenegger. Good special effects and kinetic energy help "Riddick" just barely overcome its conventional, sometimes nonsensical storyline.

The plot is a contrivance to get the untouchable badass Riddick into impossible situations and then inexplicably wriggle out of them. The energy and enthusiasm of the action scenes is contagious, and the movie picks up momentum as it races along. But in one particular scene, Lord Marshal simply lets a captive Riddick go free so we can watch him fight. Does the plot have holes? Yes. Can they be overlooked in the name of fun? Sure.

Special effects obviously play a huge part in a movie like "The Chronicles of Riddick." And while some of the indoor sets look way too much like, well, indoor sets, the CGI effects are pretty impressive. The Necromongers' spaceships and battle gear all have the same ancient Grecian design. The effects blend in rather well with the backgrounds, and the Necromongers' massive fleet has an unusually vertical style. That visual flair is consistent throughout the picture, giving the fight scenes a swooping, kinetic feel.

Dame Judi Dench wins the odd casting award of the year for playing Aereon, an "Elemental" being, whose narration bookends the story. She floats in and out of scenes in the all-knowing wise-person role, and is onscreen maybe all of the eight minutes that she also appeared in "Shakespeare in Love," which won her an Oscar. (Do I smell another statue in the esteemed Dame's near future? Actually maybe so, but not for playing it straight.) 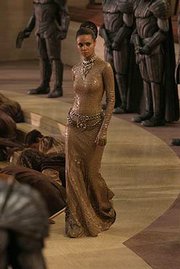 Karl Urban, better known as Eomer in the "Lord of the Rings" trilogy, does a satisfactory job showing his Necro commander's indecisiveness. However, the traces Eomer in "Riddick" (as well as David Wenham's Faramir in May's CGI blockbuster "Van Helsing") underscore the importance of solid storylines in today's fantasy films. They averaged way less screen time in "Lord of the Rings," but managed more depth in every scene. Had Diesel's Riddick been written or acted a little more like a human and less like a one-man killing machine, we might be able to empathize with him more. His character softens up a little at the end as he did in "Pitch Black," and it's welcome, if not entirely too late.

Luckily, "The Chronicles of Riddick" has a sense of humor, even if an unoriginal one. It's mostly filled with pat action hero comebacks, but the moments of levity are appreciated. Unlike the somber and serious tones of recent sci-fi under-performers like the "Matrix" sequels and "Battlefield Earth," "Riddick" is intentionally funny. To work, it has to has to have that sense of humor, as will anyone who's going to appreciate this movie.