Talent hijacked in 'The Terminal' 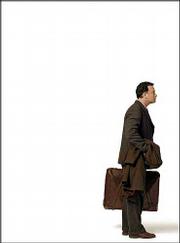 Tom Hanks plays a kindly immigrant in "The Terminal."

The word "terminal" has always proved a little distressing when visiting an airport.

There's the dual nature of the term, which can also mean "fatal" or "deadly." Then there's that aural resemblance to "interminable" -- as in, "My 8-hour flight delay has led to an interminable time stuck in the terminal."

Tom Hanks plays a character in "The Terminal" who intimately understands that concept.

His Viktor Navorski is a citizen of a small Eastern European nation whose government is toppled by a coup while he is in midair. Intent on seeing New York, Viktor is placed in bureaucratic limbo after his visa is canceled and his passport confiscated. A by-the-book immigration official (Stanley Tucci) explains that he's become a "citizen of nowhere" and that "America is closed."

Forced to live in the mall-like "international arrivals" area of the airport, Viktor spends months making the vast terminal into his home away from home.

Audiences also will learn what it feels like to be trapped in "The Terminal."

Director Steven Spielberg starts off well, with a first act that effectively captures how disorienting a situation this would be for a man struggling with a language barrier and unable to comprehend what is transpiring.

But the intriguing premise (based on an Iranian refugee's experience at France's Charles de Gaulle Airport) soon becomes a labored and contrived layover for the viewer.

The film begins to introduce one ridiculous supporting character after another -- a crazy Indian janitor (Kumar Pallana), a beautiful flight attendant (Catherine Zeta-Jones), a lovestruck food-service employee (Diego Luna) -- until it feels like a marathon viewing of the first few episodes of a sitcom. This is a world where secondary characters exist only to bolster the protagonist; they apparently have no lives beyond their day job. Their absurd actions eventually require greater suspension of disbelief than watching North America destroyed overnight in "The Day After Tomorrow."

It's a major disappointment for the masterful Spielberg, especially coming off such brilliantly executed pictures as "Minority Report" and "Catch Me If You Can." This latest setback will remind audiences more of the sentimental pap ("Hook" and "Always") that the Oscar winner was churning out 15 years ago, before he enjoyed a second wind in his career.

Sure, the movie is not without individual moments of distinction.

Steven Spielberg turns an interesting premise about an immigrant (Tom Hanks) bureaucratically stranded at an American airport and turns it into a contrived exercise featuring one ridiculous plot element another. At least Hanks comes out unscathed, thanks to a convincing performance. Spielberg is not so fortunate.

Hanks does well mastering the heavy accent (from the fictional Krakozhia), and his scenes of trying to initially communicate are handled cleverly. When he is first pulled aside by immigration authorities, he responds to their callous explanations with some well-timed non sequiturs ("Where do I buy the Nike shoes?").

The actor effortlessly embodies the character, portraying him as not just a good-hearted innocent but also a rather take-charge, savvy guy. Where he (and the screenplay by "The Truman Show" writer Andrew Niccol) falters is in trying to force-feed a romantic angle into the story. Zeta-Jones is bloody awful as the perfunctory love interest. She's too "movie star" to pull off the role. It's hard enough to swallow that her character would find this total stranger's advances interesting and flirtatious, when they really come across as tedious and creepy.

The pair struggles to generate any chemistry during their periodic scenes together. This is a case where hiring a lesser-known actress would have greatly raised the credibility of the scripted relationship.

Few will argue that Hanks is the finest actor of his era at generating instant likeability, while Spielberg is a master of cinematic technique. These guys could probably make a project like "Gigli" or "From Justin to Kelly" watchable if given the chance.

Thus, it's impossible to call "The Terminal" a bad movie. But considering the level of talent involved, it is certainly a lazy, forgettable washout.

Hanks can move on with his dignity intact. And, hopefully, this won't signal the start of another "down period" in the career of Spielberg.

Remember, "terminal" has a lot of definitions in Hollywood.