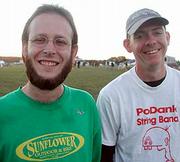 As any one who has been to the Walnut Valley Festival in Winfield can testify, the best moments usually happen impromptu. Throughout the four-day festival, jam sessions sprout up around the clock, overtaking the campgrounds with a blizzard of bluegrass.

It seems appropriate, then, that filmmakers Rob Shoffner and Mike Hannah took the same approach to making a documentary of the festival.

"The whole thing, looking back on it, was pretty amusing," said Hannah, a fourth year film student at KU. "We literally had zero plan. It's not exactly how they teach you to make films."

The two Lawrence-based filmmakers met by chance just weeks before last year's festival -- which, for 31 years. has drawn thousands of fans from around the country every third weekend in September. The two discovered a common interest in documenting the annual event. For Shoffner, a 1999 graduate of the KU film studies program, the project seemed like a perfect fit to kick off his new video production company: Larrytown Productions. For Hannah, it was a perfect way to keep busy while taking a year off school.

Armed with only two digital cameras and a week's worth of camping gear, the duo met at Winfield and set off in different directions. Barred from entering the proper festival with cameras, they instead chose to focus their efforts on the Pecan Grove, a stretch of camping well-known for its 'round-the-clock music, including the unofficial "Stage Five" and countless informal jam sessions.

"In the film world they call it 'cinema verite'--truth in cinema," Hannah said. "There's no commentary or interviews or artificial lighting or dollies. Everything's natural, hand-held shots of live action."

Among the bands featured are Split Lip Rayfield, The Wilders and Tulsa's PoDank String Band, all of which were contacted after the festival to lend their permission to appearing in the documentary.

"It was real guerrilla style," said Shoffner, a five-year veteran of the festival. "They had no idea they were being filmed, which was the style we wanted -- just to capture the moments and put it together in the editing room."

After a brief hiatus to earn money for editing equipment, Shoffner and Hannah began the arduous task of sorting though more than 20 hours of footage. Five months later, "The Winfield Documentary Series Part 1: The Pecan Grove 2003" was ready to screen.

"I think the people who are going to be most into it are the Winfield fans," Hannah said. "It's a pretty unique cultural event ... if you go down there and you see all these people you've never seen before, they'll blow your mind."

As the name implies, more installments of the documentary are in the works. The duo will shop the first edition to festival organizers and bands in hopes of gaining access to the main stages next year and filming major acts like fingerstyle guitarist Tommy Emmanuel. 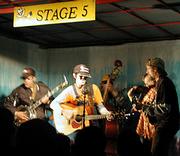 "This is kind of a demo reel," Shoffner said. "We just want to get the word out that there's a documentary series out there."

According to festival spokesperson Rex Flottman, however, it may be difficult for Shoffner and Hannah to get access to the main stages due to stipulations in performer's contracts that call for exclusive audio and video rights.

"Many contestants have their own arrangements and they don't want copies getting out," Flottman said. "There's a lot legalities and copyrights that can get to be a real can-of-worms."

While Shoffner and Hannah aren't the only ones who have attempted to document the festival, they may be able to fill a niche that appeals to campground diehards. A Winfield-based production company called Legleiter Productions produces a highlight reel for every five-year anniversary (the most recent being 2001), but those videos tend to focus on main stage performers and competitions. 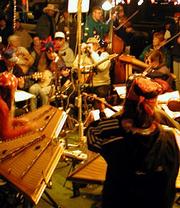 "Our biggest competitor in anything we do is your personal camcorder," said Kurt Legleiter, co-owner of the Winfield-based video production company.

While they iron out their plans for next year, Shoffner and Hannah will try to solicit as many pre-orders as they can for "Part 1," which will screen Tuesday at Free State Brewery and Wednesday at The Jazzhaus. The team plans to do a DVD release of the documentary within the next couple months.

"It's kind of a word-of-mouth festival, and that's the way I'd like the documentary to be sold," Shoffner said. "I don't really like to see (the festival) getting as popular as it's getting, but at the same time I'd like to see it be successful and I'd like to be able to sell my movie."

An impromptu campsite jam at last year's festival, including this article's author at the far left.