Reporter testifies to irony of name

For the past several weeks, I have watched with increasing interest the Journal-World's series of occasional feature stories about Lawrence residents who have the same names as famous people.

First there was Roy Williams, then James Bond and, most recently, Minnie Pearl.

I kept thinking to myself, "Hey -- what about me?"

I, too, have a name shared by a famous person, and I'm reminded of it all the time. My name is Jim Baker, and, among other duties, I write for the Journal-World's Faith page every week.

My namesake doesn't spell his name exactly the way I do, but our names sound alike.

I'm referring to former televangelist and co-founder of the PTL (Praise the Lord) Ministry Jim Bakker, who resigned in disgrace in 1987 for having an affair with church secretary Jessica Hahn and bilking his followers of millions of dollars in donations.

But, more than that, Bakker will always be linked in the popular imagination to his ex-wife, Tammy Faye Bakker -- she of the lush, false eyelashes, pancake makeup and ever-running mascara, liquefied by her frequent tears.

So what does that have to do with me?

I've been working on the faith beat at newspapers, on and off, since the early 1990s, not long after the whole Jim Bakker scandal made headlines and he and Tammy Faye became a national joke.

And, since that time, it's been sort of a continuing punchline that a reporter named Jim Baker -- me -- would be the guy in the newsroom who covers the religion beat.

You can imagine the ribbing I have taken, mostly from my sources and contacts in the religious community.

But I guess that's to be expected when you call churches, day after day, and say, "Hi, this is Jim Baker. May I speak to the pastor?" 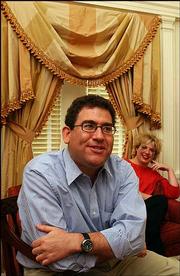 Journal-World reporter Jim Baker, who shares his name with noted televangelist Jim Bakker, writes for the newspaper's Faith page and takes a lot of ribbing from church sources about his name. One of the most common questions is "How's Tammy Faye?" to which he jokingly answers, "She's doing great."

Often, there's a silence at the other end of the line, followed by what I swear is a stifled giggle.

Or, I'll get this response: "How's Tammy Faye?" -- punctuated by uproarious laughter, as if this is the first time I've ever heard this question.

I laugh along good naturedly, saying, "Oh, she's doing great," and then take pains to point out that I'm no relation to the televangelist and that my last name has only one "k."

In recent years, I've been hopeful that the joke would die down, as Bakker's wife has remarried and is now Tammy Faye Messner, diluting the connection to her former husband.

And you don't hear much about Jim Bakker these days, even though he has returned to television, albeit on a much smaller scale. He and his second wife, Lori, host "The Jim Bakker Show," a TV program taped live in Branson, Mo.

That's a little too close for comfort, geographically speaking, for my taste.

I wonder if Bakker ever has call-in viewers dial up his show to ask, "Are you the guy who writes the Faith page for the Journal-World?" -- followed by uproarious laughter.