It sounds odd, Harriet Lerner admits, but fear can be a positive teacher.

Even the fear inspired by the catastrophic events of Sept. 11, 2001 -- when Lerner was in New York on a book tour and watched fear barrel into the hearts of the American people -- forged healthy, human connections. 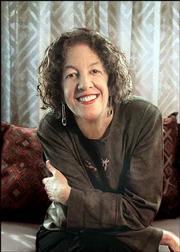 Harriet Lerner, Lawrence psychologist and best-selling author, will give a talk and sign copies of her latest book, "Fear and Other Uninvited Guests," Monday evening at the Lawrence Arts Center, 940 N.H.

So it's not an emotion without its perks. But it sure sucks when the perks aren't apparent.

"We need to know how fear operates when it doesn't take us in a positive direction," says Lerner, a clinical psychologist with a private practice in Lawrence.

Lerner's latest book, "Fear and Other Uninvited Guests: Tackling the Anxiety, Fear and Shame that Keep Us from Optimal Living and Loving," works from the thesis that the three emotions in its title cause almost all the problems for which men and women seek help.

Lerner is promoting the title during a national book tour. She'll give a talk and sign books Monday evening at the Lawrence Arts Center, 940 N.H.

The first truth to accept, she says, is that anxiety, fear and shame are unavoidable for everyone.

"The biggest problem is we're often not aware of how fear and chronic anxiety and shame are affecting us," she says on the phone from a hotel in Berkeley, Calif. "We may not even be feeling these emotions at all."

Some of the effects of chronic anxiety are:

The trick isn't trying to duck the "big three" emotions but learning to cope with them as well as possible. Lerner says she bristles at self-help books that offer "large and silly" promises about forever conquering uncomfortable emotions.

It's just not possible, she says, but there are techniques to deal with difficult moments. Among them are finding a way to calm down (because "no one thinks clearly in the midst of a tornado," Lerner says), avoiding avoidance by acting when you're afraid and not letting anxiety over one specific issue bog you down altogether.

Lerner's book relies heavily on both clinical and personal examples. It begins with what she calls "fear lite" -- for example, dread of public speaking or riding in airplanes -- and graduates to the more wrenching lessons the universe sometimes sends, such as illness or death.

Against the recommendations of some of her colleagues, Lerner used plenty of examples from her own life. For instance, she used to detest public speaking as much as the next adult, but facing her fear -- and really screwing up a couple of times -- eased the pressure. In fact her obvious humanity even endeared her to audience members.

She tends to elicit the same reaction when she's honest about her own vulnerabilities in her books.

"I believe that I can be the very best teacher by sharing not only my wisdom and competence but also by sharing my vulnerabilities, limitations and authentic experience," she says. "When I think about who gives me courage, I don't think about larger-than-life figures with all their imperfections airbrushed out."