Video game vixen Samus Aran returns yet again to the small screen in a prequel to the original Metroid for the Nintendo. Samus tells the tale of what exactly went wrong on her previously unknown first mission on the planet Zebes. 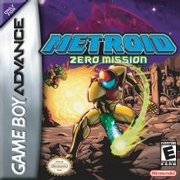 One fresh addition is the Power Grip, which lets Samus hang from ledges. Sure, this may sound like an old hat to most action gamers but the integration into a Metroid universe proves to be a welcomed addition. The control is particularly tight and polished, giving the gamer a sense of victory in each confrontation, no matter the size of the baddie. I would expect nothing less from a first-party Nintendo title. The attention to level design is worth of the Big N's pedigree for sure.

The Morph Ball continues to be the cornerstone of the series and this is where most of the exciting puzzles come into play. Most of the creativity is right on par with the previous GBA entry Metroid Fusion.

Away from the Morph Ball and puzzle elements, however, are particularly easy boss and sub-boss battles. The patterns aren't as hard to figure out and most bosses can be thwarted with a barrage of missiles. It makes the prize fights a little more mind numbing than it should be for a Metroid game. Even at the bitter end it doesn't get particularly challenging. Still, you will unlock Hard Mode where you can get an alternate ending if you wish to endure a better challenge. Given the polished nature but unfortunate five-hour length of the mission, you'll most likely be inclined to play through it again.

The overall familiarity of the planet Zebes eliminates the "wow" factor from ever coming with Zero Mission. Don't get me wrong, it's a strong title and is a blast by itself, but doesn't do too terribly much to outdo those in the series before it.

The graphics are vivid, detailed and immersive. It's what you'd expect out of a current-generation GBA game. Nintendo knows its hardware and it shows. The between-level cutscenes tie the story together wonderfully and display a keen sense of comic book art. The familiar tunes shine through on the mini speakers. It's one of those experiences that makes you forget you are playing on a small handheld versus a TV console.

Zero Mission is highly recommended despite its short length and lack of completely original punch. It proves that fine-tuned gameplay can overshadow these minor drawbacks. I just hope it's not a trend that Nintendo is getting comfortable with.