HBO back with 'Sopranos' hit

New York — "The Sopranos" is back, and all is wrong with the world.

Great news! It measures up -- especially after last season, which didn't.

Last season, "The Sopranos" was gripped by tension. Week after week, the pressure built. As if resigned to inevitable doom, mobster Tony Soprano and everyone around him -- and, to a large extent, the series -- sank into a funk.

Sure, there were moments of explosive (if temporary) release. But just two of the 13 episodes delivered a solid dramatic payoff: when Tony offed Ralphie and then offed his head, and in the finale when Tony waged war with his wife, Carmela, and she threw him out of his house.

That was way back yonder in December 2002. Now, as "The Sopranos" begins its fifth season at 8 p.m. Sunday on HBO, it seems headed on a different, more rewarding track.

Make no mistake, any hour of "The Sopranos" beats an hour of nearly anything else on film. But the four new episodes made available for review do more than introduce fresh turmoil into Tony's life. They introduce a welcome new theme enhancing last year's gloom: a sense of general befuddlement.

Tony (series star James Gandolfini), his wife (Edie Falco) and other key characters have lost their bearings. Too much has changed; too much is uncertain. Can they regain their footing before it's too late? That seems to be this season's question. 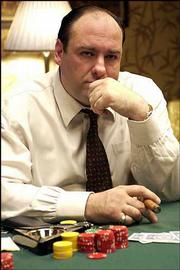 AP Photo James Gandolfini as Tony Soprano appears in this scene from HBO's "The Sopranos." The series is back for its fifth season, offering the arrival of several new mobsters and Steve Buscemi as a cousin of Tony's.

One cause of shattered equilibrium is the arrival of several new mobsters who, jailed during the crackdown on organized crime in the 1980s, are out after serving their time.

Also back on the streets (in the second episode) is a cousin, Tony Blundetto (played by Steve Buscemi), whom Soprano wants back in the family business.

The life of Tony's nephew Christopher (Michael Imperioli) hangs in the balance: He's kicked booze and drugs -- for now.

Even Tony's psychiatrist, Dr. Melfi (Lorraine Bracco), is confronting new issues, thanks to Tony, her longtime client who now wants to be more.

Tune in to see what happens.