The new king of the, uh...MX circuit!

Extreme Motocross games have had their fair share of products. We've seen quite a few MX games that did a nice job of representing the sport, but nothing that actually shined out of its niche. That is, until now. 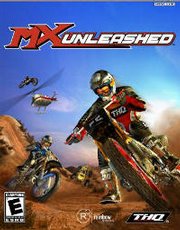 MX Unleashed comes out of the THQ acquisition of Rainbow Studios (popular for the ATV Offroad series) and packs quite a surprising punch in the extreme motocross genre. Freestyling, racing and trickery are common amongst MX games, much like what SSX does for snowboarding. We've seen it all, it seems, when it comes to over the top tricks, so what else is there to do? Fine tune the gameplay and control, that's what.

Unleashed does just that. Not since F-Zero GX have I felt so in control over my vehicle. Taking corners and using the clutch to get that extra burst off of tight turns feels so natural it's incredibly easy to jump into. You can try your hand in career mode, nationals and Freestyle mode to adjust to your tastes. And don't worry, there are an incredible amount of tracks to unlock. The best part is, you aren't limited in what mode you have to play to unlock them! It's ironic in that it helps to lengthen the replay value. How?

Well, many gamers might be frustrated quickly with how unapologetic the races can be. Sure you can zoom ahead of your opponents and take first, but one wrong move will send you to a disastrous spill that throws you back to sixth to eighth place almost every time. It assumes you already know the nuances of the tracks and expects you to not screw it up. For instance, if you take a jump at an off angle, there is no invisible wall to correct your trajectory. You will land out of bounds and must get back on track within five seconds. There is no real handicap curve at first, which could make unlocking new venues a chore. But, again, you can unlock these places in other ways.

What makes Unleashed particularly stand out is the physics system. How your tire hits certain terrain at different angles will determine how smooth, or not so smooth, your landing will be. You can pre-load your jumps by adding that extra "mmph" at the peak of a ramp. That, too is dependent on how much you pre-load using the analog stick.

The last wonderful element of the physics system is how you are thrown from your bike; it's never the same. Depending on what you bump into or how sideways you land, your rider will fly off, bounce and roll like an actual human would. It looks so real you will probably wince before reminding yourself it's a game. Too many other racing games have one stock animation for getting thrown off the vehicle. Remember the other MX games that would magically move your bike aside if you were about to land on an opponent? Not here. If you are skilled or lucky enough to land on an opponent, they will be crushed or toppled in the correct, but painful manner. MX Unleashed sets a new standard.

The trick system is pretty standard. Fans of any extreme sport game from Tony Hawk to SSX will feel at home immediately. The tricks look authentic and are complemented by smooth animations. In freestyle mode you can basically free ride and rack up as many points as you can by doing superhuman combos. The tricks don't go as deep as an SSX, but what's there is solid and definitely fun.

What's more, there are non-bike vehicles to unlock. Pilot a bi-plane, ATV, truck and other non-sequitur vehicles and race against each other in multiplayer. These vehicles also handle well and extend this treat beyond just a pure novelty.

The graphics are clean and the engine supports many things going on at once without any hiccup in framerate. That being said, it's not the prettiest game available, but it's solid work with decent textures and nice character models. It's slightly uninspired but high on accuracy. The Xbox version has a stunning 1080i option for those with a capable HDTV.

The music is a general bag of unknown-to-more known rock bands singing about bad fathers and/or girlfriends. With the Xbox version your own tracks are automatically integrated. The sound effects faithfully represent the puny motorbike engines, humming and whining with all the right tones in context. Solid work.

MX Unleashed is my current favorite MX game, hands down. The gameplay elements are tight, intuitive and accurate. The only thing sorely missing is an online element. With that, MX Unleashed would be difficult to top.