Review :: This Building Is Cursed, "Demographic" 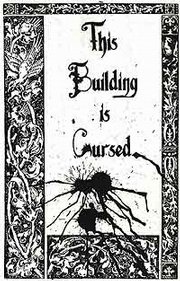 That should be the motto for This Building Is Cursed's first official release, a six-song EP titled "Demographic." Forward progress - as in metal and noisecore diehards evolving and trying out new ideas, discovering the delights of melody and dynamics and daring to dwell in a melting pot of diverse influences.

But forward progress is also the word of the day for this local band because no song ever returns back from whence it came. Forget about choruses; TBIC doesn't have them. And the members don't sing either.

Instead, TBIC's songs play out like stoned jam sessions amongst a bunch of friends who all like metal but aren't really sure what type of metal. There are elements of K.C. and Lawrence hardcore - Coalesce and The Esoteric - thrown in, but there also seems to be a fondness for more melody-conscious bands like Hum or Cave In.

Thus, songs that begin with fingerpicked acoustic guitar a la Metallica are sure to also include a Sabbath-esque sludge-rock breakdown and a weird prog-rock bridge in a 'what the hell?' time signature. It's like each musician came up with a cool part and then the band found a way to piece them all together.

For awhile, the formula works. The parts are actually quite intricate and ear-catching, and the creative process of composing them spills out though the speakers and conjures images of a great live show.

But after three or four songs, something feels lacking. For this reviewer's tastes, that something is probably vocals. For others, it may be the requisite level of musical virtuosity required to keep a listener's attention when there are no vocals and no repeating hooks. In TBIC's case, that level is high but maybe not high enough.

Still, there are many qualities which make "Demographic" worthwhile, such as a stellar-sounding recording and sleek packaging. All in all, TBIC has produced a quality product with a unique musical vision that should catch the ears of people inclined to this sort of experimental instrumental metal/noise rock.