Jet Li has become one of the more revered martial artists of our day. His technique has been compared to Bruce Lee; he's fast and he fights bigger than his body. It's a no-brainer that he would eventually garner his own video game title. 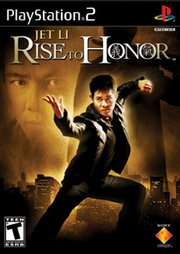 Rise to Honor comes in at a perceived downturn in Li's career, hoping to add a fresh perspective in the action genre, using many motion-captured moves specific to the Jet-man. Instead of having to memorize various button combinations to make mortal combat interesting, all you need to use is the right analog stick to fight, pressing it with particular rhythm to pummel your opponent. If you are surrounded, you can perform combos by switching up your hits by simple pressing the stick toward the desired foe. It's a technique used well by the recent Grabbed by the Ghoulies on the Xbox. It can get pretty tedious at times since the demand on moving the stick is as furious as button-mashing, which doesn't bode well for an analog stick.

Of course, you can slow down time with your Adrenaline attack, linking combos with greater ease. Add blocking, throwing and counter moves, and you have a nicely robust fighting engine for an action game.

Gunplay is also a factor. You can lock onto enemies without even looking their direction. This is rather unfortunate because it makes gun battles all too easy. It truly becomes a button mashing even in where you can walk straight into a mess of five enemies in plain sight, firing away with an 80% success rate. You can hide behind objects if you so desire, but it's usually not needed.

In order to jump over objects, climb and other infrequent actions, you have to press the R1 button when in context. These context sensitive actions play out rather clunkily and unless you are good at anticipating these contexts, you may find your self in a quick death situation. This results in a tedious trial and error session, learning to memorize where the context button needs to be pressed. Fortunately, you always restart close to where you died. It's almost as if the developer knew that the context actions weren't as refined as they needed to be.

Another problem is the artificial intelligence. Well, it's not very intelligent. Beyond trial and error, the game is basically a freestyle action game with endless hordes of enemies to see what new combos you can link. Some boss battles are particularly mundane since the patterns only allow a split-second window to actually inflict damage. This is odd for a human fighting game.

Regardless, the animations are done well and are very authentic to Jet Li. Also, the game's movie scenes are in real-time and pre-loaded, keeping the action uninterrupted for the most part. The whole graphical presentation has high production value, and does a great job maintaining a cinematic touch.

The music is good for an action flick. It accents the action without being the centerpiece. The sound effects are particularly crisp and come alive even on the PS2. The whole aural experience is nicely refined.

Much of the effort was spent on presentation rather than refining the gameplay. Unfortunately that's a fatal flaw. The stuttering controls, context detection and artificial intelligence don't warrant a high fun factor. It's like a movie with a great cast, art director and composer without a seasoned director.