What began as childhood imitation has blossomed into three decades of creation for dancer and choreographer William Whitener.

He realized he was capable of doing most of what he saw the professionals doing.

"I mostly mimicked," he recalls. "And I improvised a great deal at home. I would put record albums on and dance for hours, create movement and scenarios. And that led to getting everybody engaged in the neighborhood, other children, and devising our own shows and performing them in garages and back yards."

It wasn't long before back yards gave way to private studios and stages. At 17, Whitener moved from his boyhood home of Seattle to New York and honed his dancing chops under the tutelage of legends like Robert Joffrey, Bob Fosse, Twyla Tharp and Jerome Robbins.

He long ago added the role of teacher to his repertory and has choreographed more than 40 dances for stage, television and Broadway.

He spent the last week of February in residence at Kansas University, teaching classes and setting a playful new dance on 23 members of the University Dance Company.

"Beat" was inspired by Whitener's childhood observations of the beat generation. The nine-minute number features more than 20 dancers and is rather tongue-in-cheek, Whitener says.

The dance is performed to three distinct pieces of music: "How to Speak Hip," a 1961 interview between a hipster and a square commentator; "Clapping Music," a 1972 Steve Reich song composed simply of clapped rhythms; and "Kookie's Mad Pad," a spoken-word number released by Edd Byrnes in 1959. 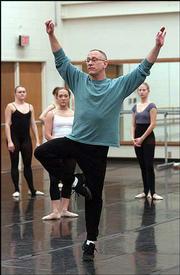 Intertwined with contemporary dancing are popular dances from the time period, Whitener says.

"The students have been very eager and dedicated to the process," he says, "and we've had a lot of fun creating it because it has a lot of humor to it."

The dancers will perform "Beat" at the University Dance Company's spring concerts in April.

Great change has been afoot in the dance world since Whitener came on the scene, first with The Joffrey Ballet in 1969.

The most dramatic of those changes, Whitener says, is the disappearance of federal funding for a national touring program.

When that funding was cut in the 1980s, he says, "It sent a message to American society at large that the arts weren't worth it."

It also undercut decades of audience-building.

"If you take the foundation away ... what happens is soon you have more than one generation that hasn't had an early exposure to the arts, and so they don't feel the need, but more than that, they don't crave it," Whitener says.

In the Seattle school system, Whitener saw half a dozen arts performances -- symphonies, ballets, theater productions -- each year. That still happens in school districts across the country to a certain degree, he says, but children in the several generations since the federal funding was cut don't seem to possess the critical viewing skills their historical counterparts honed through more frequent exposure to the arts.

Although it's had ups and downs, the Kansas City Ballet's recent string of good fortune makes it something of an aberration in the contemporary dance world.

The ballet has held steady at about 25 dancers while companies across the country are cutting personnel. And, as part of the campus of the future $30 million Metropolitan Kansas City Performing Arts Center, the ballet is getting a brand new home, complete with eight studios, one large enough to seat 180 people for informal performances.

The new ballet building, which will cost $12.7 million, is being paid for by a separate capital campaign.

"We're going against the grain in terms of what's happening nationally," Whitener says. "Most people are cutting back; we're expanding. My colleagues are startled to hear this."

Artistically speaking, the company is enjoying momentum as well. It's been featured in The New York Times for several of its programs and will take a ballet to New York this month as part of a Balanchine festival.

All this success means Whitener -- now in his 50s -- may be well on his way to following the advice of former teacher and friend Bob Fosse, who once advised Whitener to "Dance 'til you drop."

Given the fact that Fosse did just that, it's more likely Whitener hopes he can shape his career to mirror the sage words of his first professional teacher.

Joffrey always said you could be forgiven for anything in the middle, as long as the beginning and end were strong.