Return of the V

The vagina is returning to Lawrence, and it's hoping for its biggest audience yet.

A cast of community performers will bring "The Vagina Monologues" to Liberty Hall Monday for a one-night performance of the popular play, which candidly addresses issues of sexuality, self-image and abuse in the lives of women. 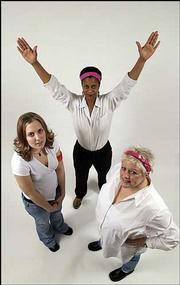 Director Jennie Washburn took on the challenge of producing the first community-based production of "Monologues" after acting in a couple Kansas University-related productions of the play.

Washburn, 51, said she was drawn to the monologues for their powerful depictions of women overcoming adversity and their ability to inspire growth.

Dawn of a new day

The Lawrence production of the play will be one of more than a thousand "V-Day"-related events across the world that seek to raise money for national and local organizations devoted to stopping violence against women.

Playwright Eve Ensler wrote the play and founded the V-Day organization after conducting more than 200 interviews with women and being inspired to tell their stories of survival, self-discovery and sexual empowerment.

Sold-out productions of the play in New York and London snowballed into an HBO documentary on the play and interest in performing it in communities worldwide. The play has already been translated into more than 25 languages.

Ensler made the unusual decision to allow the play to be performed free of licensing costs as long as the proceeds went toward charitable causes.

Community groups, for example, are only allowed to use 10 percent of the proceeds to cover expenses.

Proceeds from the Lawrence performance will be split between Women's Transitional Care Services, The GaDuGi SafeCenter (formerly known as the Rape Victim-Survivor Service) and the national V-Day organization, which this year has adopted a goal of helping stop rape and abuse in Juarez, Mexico.

GaDuGi director Sarah Jane Russell said the money would be used to help pay rental costs for recovering women and utilities for the organization's building -- items not covered by grant dollars.

Russell said the play painted a vivid picture of the trauma of rape and domestic abuse.

"Many times, people say to each other in our field, 'If you're not a survivor, you don't understand,'" she said. "Well, I don't agree with that ... I think being exposed to this kind of content in a play does allow people to have empathy, or to maybe get just a glimpse into the hurt, and that can only serve as growth."

One of the play's most vivid monologues, "My Vagina Was My Village," is dedicated to women in Bosnia who were raped as a systematic tactic of war.

'The Vagina Monologues' by Eve Ensler

Another, "The Memory of Her Face," simultaneously addresses beatings in Islamabad, burnings in Baghdad and torture in Juarez.

"Every year there's a couple people that have to leave the performance during certain pieces," Washburn said. "Frankly, people see this and if they've experienced abuse it can bring up issues for them that maybe they've buried, or that they thought they've dealt with and they haven't."

But for every tearful piece there's another that inspires laughter. "My Angry Vagina" often elicits roaring responses from empathetic female audience members.

"(It pokes fun at) the discomforting parts that others have projected on us, like those ridiculous gynecological exams that are just so icky," said Lou Ann Thomas, a 51-year-old freelance writer from Oskaloosa who will perform the monologue. "It even makes fun of thong underwear, which I've never really understood why that exists in the first place."

Bianca Babcock, 19, joined the cast as a way to get back into theater following her graduation from Lawrence High School. Her monologue, "My Short Skirt," defends a woman's right to wear a short skirt without getting harassed.

"It's not so much acting as it is delivering something that you believe," Babcock said. "Honestly, being a woman, you really don't have to dive that far; it's right there in front of you."

Though Babcock's monologue could comfortably fit alongside any feminist literature, she said she didn't consider herself a feminist.

"The one problem I do have with it is that it does create a double standard, because while women want to be able to say the word 'vagina,' as soon as a man were to do something like this it would not be allowed," she said. "Like, if they made a play called 'The Penis Monologues,' people would totally freak out."

The cast also will recognize "Vagina Warriors" from the community, said Washburn, a tradition started this year by Ensler.

"We're looking for women that are typical of what (Ensler's) explanation of a vagina warrior is: people that have risked something in their lives to transform abuse into service," Washburn said.

The cast, which has been rehearsing in small groups, will have its first stage rehearsal the day of the show. Despite the hectic practice schedule, Thomas said she had no worries about pulling the show together.

"I'm just hoping that we get to experience the unifying connection of women talking about themselves and each other and sharing some laughs and some poignant moments and maybe pulling together," she said. "And I get to curse onstage ... that's always a plus."