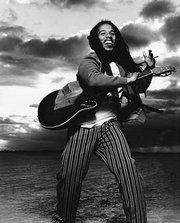 In a short but frustrating interview, lawrence.com spoke with Ziggy Marley, son of Bob Marley, who, among other contributions, has ensured that college students will always have a soundtrack to their freshman year. But this isn't about Bob. To our knowledge, it isn't about anything else, either. Huge, unintelligible segments have been omitted. Oblique references to unknown topics are retained where possible. lawrence.com apologizes for failing to better engage the groovy Mr. Marley.

What's your home base these days?

Everywhere on Earth. You're universal.

Do you spend any time at the house on Hope Road [56 Hope Road, the house in Kingston Bob Marley bought in the '70s.] anymore?

Sometimes. Been travelin' a lot though.

How has the music scene in Kingston changed since Jimmy Cliff depicted it in "The Harder They Come" in 1973, now that payola has become the standard in music?

It start out by promoters. They usually just do that. ... Good for promotion.

You're involved with a lot of causes right now: Power to the Peaceful, U.R.G.E., and Ghetto Youth. Tell me about those, and what they do.

Power to the Peaceful, I think that's Michael Franti's organization, 'cause I'm on tour with Michael Franti and Spearhead. U.R.G.E. [Unlimited Resources Giving Enlightenment] is a church organization that we kind of put together. Basically we help the needy in Jamaica -- orphanages, children -- focus on children for U.R.G.E. Right now, while I'm on tour, some of the proceeds from the ticket go to that charity, and I'm gonna, when that tour finishes, I'm gonna record what we have and do something with it. Ghetto Youth is a record label in Jamaica, which will hopefully help give young Jamaican musicians a chance.

Your music is always so positive. How do you maintain that?

True. Are you a practicing Rastafarian?

Are you an active practitioner of that religion?

It's not a religion. It's a way of life. And a complicated thing. And I am me. I am who I am. And I live according to natural life. You know, live good, love each other, eat healthy, you know, be fruitful and multiply, thou shalt not kill, you know, steal and all of these things. So it's not really a religion and just a way which we choose to live life that kind of separates us from the existing society, by just how we think. We think on a more conscious level -- I mean, we're very skeptical of the system, you know?

Does that way of life, and the truth you're talking about, enter into your music?

Yeah, the part of the journey to live up to my full potential as a human being.

Do you smoke a lot of ganja?

I smoke herb sometimes ... It's not a big part of my lifestyle.

So you don't have a problem when you're in the states with deprivation?

I'm not a addict. I can do without it.

You did the theme song for the show "Arthur" on PBS kids, [not to be confused with "Arthur's Theme," performed by Christopher Cross]. How did that happen?

That was a while ago. They just asked us and we did it, you know?

Great story. Have you ever done a guest spot on that show? Cause Yo-Yo Ma got to be a rabbit, I think, and Joshua Redmon may have been a moose or something.

Do you have a new record out?

Yeah, there's a record out last year called "Dragonfly" -- first solo record for me. We're touring on it right now and promoting the message.

Do you find that you and Michael Franti have similar politics?