Back in 1987 I frequented my favorite Godfather's Pizza. I was a 7-year-old kid who loved to play the Galaga machine that was there along side Ms. Pac-Man. Galaga was my favorite space shooter until R-Type revolutionized the way I looked at side-scrolling space shooters. 17 years later, the classic franchise sees its last iteration on the PS2 in R-Type Final. 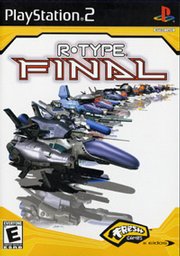 Like previous renditions, you can use the Force System to power-up your ship as you choose and send it into battle against the evil Bydo Empire. You can select over 100 ships and have a seemingly endless amount of customization options. The new AI Mode allows custom ships saved on a memory card to battle head-to-head against the computer or your friend's customized machines. Nice.

If Ikaruga for the Gamecube was smooth and brilliant, R-Type Final is smooth, brilliant, colorful and varied. The sheer amount of weapons and customizations you can perform to find your own style of ship add a stellar dimension to an already varied formula. As you blast through countless enemies, you will always encounter a huge boss that is nicely detailed and fun to look at. Some games are spectator games. In other words, some games are fun for your roommates to watch even though you won't let them play. R-Type final finds itself among those in Halo and kill.switch.

One gripe of past R-Types is the erratic movement of the ship; it reacted too quickly for maneuvers through narrow passages. Here in Final, you can adjust to one of four speeds for your ship. This is incredibly useful, especially with regard to the aforementioned past gripe.

R-Type is the opposite of the current Ninja Gaiden with respect to challenge. Gaiden will make you break several controllers because of the unrelenting difficulty. With R-Type Final, you may have to play with your toes to face such a challenge.

Developer Irem wanted this last R-Type to be brimming with gameplay, i.e. the sheer amount of weapons and ships. Unfortunately, you'll be done with the game way before experimenting with hardly 15% of the combinations of ships. It's like stuffing your mountain back-pack for a hike up a mole hill. This is the game's biggest shortcoming.

The graphics are bright, flashy and fast. It's an epileptic's worst nightmare. No, really, there is a warning in the instruction manual cautioning those with a history of seizures. The sound is okay. Many of the effects sound like a revised throwback to the 80's, with better sampling and compression, of course.

Overall, R-Type Final goes out admirably. Despite its short length and easy-peasy enemies and bosses, it's a load of fun the whole way through. Any PS2 owner should check this out, especially the ones who still list Galaga and Space Invaders as their favorite games.