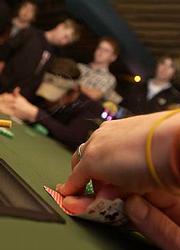 A poker player checks his hand before betting at the final table of Tuesday poker night at The Meat Market.

It's a half-hour into Poker Pub night, and Leo Magsalin is dealing with his first crisis of the evening.

"Look at that," says Magsalin's floor man Daniel Simmons, pointing to a pellet-sized black circle on the back of playing card retrieved from alert player. Magsalin's face becomes tense as he sizes up the problem. "That's a pen mark," he says. "Someone's trying to mark a card."

After an anxious minute of detective work, Magsalin concludes that the mark was just a false alarm; most likely a defective card. The black-suited ringmaster breathes a sigh of relief and returns to his duties greeting players and consulting his floor men (and one floor woman).

On this chilly Tuesday night, nearly a hundred people have packed into The Meat Market in downtown Lawrence to play No-Limit Texas Hold 'Em, but only 88 made the seating for the first round. The entire lower deck of the bar in engulfed in a sea of green tables and Patriotic-colored poker chips. A cloud of smoke slowly consumes the chattering crowd, which boats equal numbers of college students, twentysomethings and parents. By the end of the night, dozens of people will gather around the final table, cheering on their friends as they race for the prize (which tonight is a DVD player and a copy of the poker movie "Rounders").

"It's a good way to kill a Tuesday night," says Dave Tacha, a Lawrence-based insurance salesman who came with a couple friends. "There's a lot of people who really think they know what they're doing -- you know, the people who wear the sunglasses. It's ridiculous, especially when you're playing for free."

Know when to hold 'em
For Tacha, poker isn't so much about winning money as it is about socializing and engaging in friendly competition. It was players like him that Magsalin and friend Matt Habiger hoped to attract when they started Poker Pub Inc., a Lawrence-based company that hosts free poker tournaments four nights a week at local bars.

"We're giving people the experience of it with no stakes in it at all," said Magsalin, the CEO of the company. "It's more bragging rights for people than it is actually winning something. We post them up on the Website so they can tell all their friends and family about it. What better way to show that you're a good poker player than to have your picture on the Internet?"

Since producing the first Poker Pub night on Feb. 15 at the Pool Room, Magsalin and a crew of helpers have started hosting weekly nights at four Lawrence bars: Kasper's, The Pool Room, Last Call and the Meat Market. Each night's proceedings work a little bit like a traveling circus: arrive early to set up tables and chips, sign up players, assign floor men to monitor the proceedings, and reward the winners with moderate prizes (though the winners get to compete for a Vegas vacation).

"We try to make it as professional as we can and as real as any casino would be," Magsalin said. "You see us in the suits and everything ... we want it to feel like a Vegas experience."

Poker Pub has a unique business model that allows it to make money off of something that is essentially illegal in the State of Kansas: gambling. By not charging an entrance fee and not using real money, Poker Pub sidesteps the law and instead makes a profit by charging bars for its services.

Meat Market owner Rich Davis says the agreement is a win-win situation for his business. 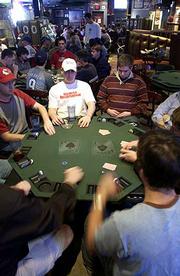 Poker players pack the Meat Market for a Tuesday night poker tournament run by The Poker Pub. Players play Texas Hold'em for a chance to win a trip to Las Vegas.

"For us to turn over a night to non-diners is a pretty big deal," he said. "It's a great thing to have people come in that ordinarily wouldn't."

Two of a kind
Magsalin and Habiger, KU graduates with biology and art history degrees, respectively, got the idea for Poker Pub after participating in a similar event in Wichita. They decided to alter the business model by developing a full-service plan, whereas the Wichita-based business left the responsibility of running the nights to the bars.

"We immediately thought to ourselves, 'God, we could do this, and we could do it better,'" Habiger said. "We set a goal for ourselves of February 15, and we did it, and we've just been rolling since."

Friends and family have also pitched in to get the business off the ground. Habiger's sister Heidi has been a fixture at Poker Pub nights, helping to sort chips and manage the floor.

"I was skeptical at first, like, 'Yeah, yeah, yeah, this is really going to work,'" she said. "Then we had our first night and it was just packed. It sold me."

One of Poker Pub's main attractions is that it offers players a chance to measure their skills against a diverse group of competitors.

"Down the road I'll play the money games at the casinos and I'll have some experience," said Shane Johnson, who won Feb. 22 at The Pool Room. "I think that's why everybody comes out -- because nobody really knows how good they are."

Poker Pub has already had offers to franchise from entrepreneurs in western Kansas, Iowa and Arizona. Habiger said he'd like to see the company expand to other states and possibly even sponsor a player on the world poker tour.

"I could see it all over the Midwest definitely," he said. "We're putting ideas together more and more every day and just kind of going with them. I mean, geez, two and a half weeks ago, I didn't think we would be this far along."

Royal flush
While it might seem silly to speak of a poker "fad" (the game came to the United States in the 19th century after centuries of developing in Asia), much of the game's current popularity can be attributed to increased television exposure. Last year, ESPN, The Travel Channel and Bravo all aired poker-based programming.

This year, ESPN will produce a 22-part-series on the World Series of Poker, up from the seven-part series the network hosted last year. That series' final episode earned a Nielson rating of 1.94 -- more than twice the audience of a nightly Sportscenter.

ESPN Original Entertainment publicist Keri Potts said part of poker's appeal is that anyone can do it and viewers relate to ordinary guys like Chris Moneymaker, who won the 2003 World Series of Poker after qualifying on an internet competition.

"Basically, it's a reality show," Potts said. "You look at Chris Moneymaker, an amateur accountant, 29, not an athlete ... You can relate more to him than you can to an NFL player, because you can't do what an NFL player can do."

That exposure has led to unprecedented interest in sending players to tournament events like The World Series of Poker, which flaunts a $2.5 million purse but requires a $10,000 buy-in.

"Every single day I'm getting contacted by groups that want to send (their winners to the World Series of Poker)," he said. "It's an amazing thing that's happened and it's all because of TV." 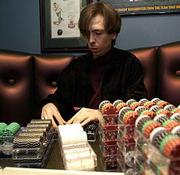 Vaughn Kruger one of The Poker Pub's organizers stacks chips used in the Tuesday tournament at The Meat Market.

While most of Poker Pub's players are happy to play for pure sport, the company may have trouble attracting old-line junkies like Matt Brown, who plays poker every Thursday night with a group of friends who each bring $10.

"There are lots of games of cards that I would play in heartbeat -- spades, hearts -- with no money involved," Brown said. "But poker's a different deal because part of the idea of being good at poker is the money that you can win or lose. People are going to gamble way differently on a hand they've got nothing to lose on."

Technically, gambling, even among friends in the home, is illegal in Kansas. The offense merits a Class B nonperson misdemeanor, with a maximum sentence of 6 months in county jail and a $1,000 fine.

"Unless there's actual complaints the police are not going to get involved," Little said. "If there's 200 cars parked out front and there's drugs going around it might be a different story."

Brown said he wasn't concerned about breaking the law.

"It's illegal to jaywalk too," Brown said. "No one's going to have a real problem with us playing 10 dollar games. Even if some police informant knew about it, he wouldn't care. I would hope he wouldn't."

But for Russ Stucky, who won Poker Pub's third night, the thrill of winning was worth more than money.

"I've never once won on my friend's nights so now I've got a little something to hold over them," he said. "It's kind of fun now 'cause everyone thinks I'm really good, even though it was all luck."

"I'm probably going to cut back though ... my wife's not happy."

The final table of the 7:00pm tournament Tuesday at The Meat Market.