Los Angeles — Paul Winfield, an Academy Award-nominated actor who was known for his versatility in stage, film and television roles, including a highly praised 1978 depiction of the Rev. Dr. Martin Luther King Jr., has died. He was 62. 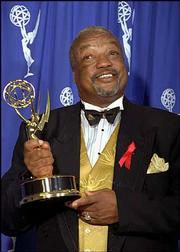 Paul Winfield displays his Emmy for Best Guest Actor in a Drama Series for his work in "Picket Fences" in this Sept. 10, 1995, file photo. Winfield, who was known for his versatility in stage, film and television roles, died Sunday. He was 62.

In 1968, Winfield played the boyfriend of Diahann Carroll in her situation comedy "Julia" -- a role that some suggest helped open television to other black performers.

Four years later Winfield's portrayal of the father in "Sounder" earned him an Academy Award nomination for best actor -- the third black actor nominated in that category. He lost to Marlon Brando in "The Godfather."

Last year, Winfield had a cameo in the ABC remake of "Sounder," a period piece set in the South in the 1930s.

He was Emmy-nominated for best actor in the title role of the 1978 miniseries "King," and nominated the next year in the best supporting actor category for playing a college chancellor willing to sing Negro spirituals to get donations for his school in "Roots: The Next Generation."

In 1978, People magazine described Winfield as "the most ubiquitous black TV/movie actor of the decade."

He finally won an Emmy in 1995 for a guest appearance on "Picket Fences." He played a federal judge whose rulings on busing inner-city children were challenged by a local resident.

Despite acclaim, Winfield was often relegated to supporting roles, including playing Jim in a 1974 remake of "Huckleberry Finn."

Sidney Poitier hired Winfield for his first movie role in "The Lost Man" in 1969. Other movies to his credit included "A Hero Ain't Nothing But a Sandwich" in the 1970s and "Star Trek II: The Wrath of Khan" in the 1980s.

Other significant roles included an appearance in the Broadway play "Checkmates" with Denzel Washington, and his portrayal of Don King in a 1995 HBO movie.