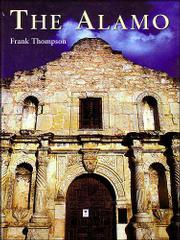 Frank Thompson is pretty modest for someone who mingles with movie stars and counsels Hollywood directors.

"I'm just a guy sitting over there," Thompson says, describing his role in Disney's upcoming film, "The Alamo."

But don't be led astray by the humble historian. Thompson, a recognized Alamo authority who will speak at a multitude of Lawrence engagements next week, played an important part in assuring the movie's historical accuracy.

His "dream gig," he says, began with an unexpected phone call.

"I got a call out of the blue one day," the California-based author says. "Turns out Ron Howard is meeting with a group of Alamo historians, and I'm invited."

Howard, the film director behind "Apollo 13" and "A Beautiful Mind," was considering a movie project about the event. The scholarly summit was arranged to help him decide if such a feature was feasible.

"I just couldn't believe my good fortune," he says, "to be involved with a movie about something I've studied and loved my whole life.

"I just wanted to send a postcard to my five-year-old self."

Upon their arrival, Thompson and his fellow Alamo aficionados signed confidentiality agreements, promising to discuss the project with no one. The group, Thompson says, jokingly began referring to itself as "the secret order of Opie" in honor of Howard's childhood character on "The Andy Griffith Show."

"We devised a secret handshake and got ourselves a password," Thompson says, laughing.

Soon after the meeting, however, Howard left the project. Thompson was crushed. Howard's executive producer had commissioned him to write a book about the making of the film shortly before the director's exit. Now it seemed the movie -- and his book -- would likely be scrapped.

But Thompson persisted. A new director -- John Lee Hancock ("The Rookie") -- signed on to the project, and Thompson convinced him the book was a good idea. After a year of wrangling with a skittish publishing company, he ended up with four weeks to write.

"So, things are a little foggy from that period, but I think I enjoyed it very much."

Thompson was also hired to write a 100,000-word novel based on the movie's screenplay, albeit under less stressful time constraints. The 50-year-old author has written 30 books in his career. Five are about the Alamo.

In addition to his writing duties for the movie, Thompson was a "casual consultant" on the set. He and two full-time advisers helped the director make sure the movie's historical nuances, such as clothing and facial hair, were accurate.

"I remember Ron Howard asking me in the beginning, 'What do most movies about the Alamo get wrong?'" Thompson says. "It's always the clothes and hair.

"The guys are made to look like mountain men, when really they should be wearing top hats and tailcoats. And they never, ever wore beards -- only mutton-chop sideburns ... all very Crosby, Stills and Nash.

"It was such a pleasure to see this movie get it right."

Thompson also found himself rubbing shoulders with one of Hollywood's A-list actors while on "The Alamo" set. Billy Bob Thornton, who plays frontiersman Davy Crockett in the movie, provided one memorable moment for the historian.

"(Thornton) had just finished the big scene where Crockett dies -- the entire Mexican army is there and he gets a standing ovation," Thompson says. "Afterward, he walks over to me, and I say, 'Well, I never thought I'd see Crockett killed right in a movie, but I was so pleased with what you did out there.'

"Billy Bob puts his hand on my shoulder and says, 'You know, the whole time I was out there I had only one thing on my mind: What would Frank think about this?'"

Thompson has seen two versions of the movie, which is slated for release on April 9. The first had "some pretty serious structural problems," he says; the second was "much, much better."

"If the last version I saw was the version released, I'd be pretty happy," he says. "You just have to accept that no historical movie will ever be 100 percent, spot-on accurate."

As for "just a guy sitting over there"? Well, Thompson was being truthful -- about his acting debut, that is. He appears in three scenes in "The Alamo," playing an anonymous man at a meeting between opposing factions within the Texas War Party.

"It's nothing special, really, though I do have a close-up," Thompson says. "But ... well, who am I trying to kid? I'll be beside myself if that shot gets cut."

A note to Hancock and his film-editing team: Remember the Alamo, but don't forget Frank.