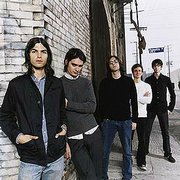 The Jason Schwartzman regime has ended. No longer can the iron fist of the Son of Talia be felt about the throats of the remaining young innocents of Phantom Planet. Although his presence is still felt by those who were unfortunate enough to incur his wrath, his name is now only spoken in whispers, and only by the very brave. lawrence.com spoke to a jet-lagged Jacques Brautbar, guitarist for Phantom Planet, about the press, the Amish, and life after Rushmore.

lawrence.com :: So you guys just got back from Europe?

Did you try the latkes while you were over there?

No, I didn't have any of those.

[Editor's note: Latkes are actually a favorite around the Chanukah season. They were supposedly served by the wives of the Maccabees to their husbands as they prepared to drive the ancient Syrians from their land. lawrence.com doesn't know what it was thinking.]

Let's just go ahead and get the Jason Schwartzman questions out of the way.

Have you noticed a change in turnout since he left the band?

Things are fine. There's no decrease in turnout of people or anything. The band was together a couple years before Jason actually started acting, so we'd started a pretty good following. We started getting a lot of press, you know, "Is this another Dogstar; another Russell Crowe band?" But I think people would come and they would see that we were actually quite good. And so the initial novelty of Jason Schwartzman being our drummer would be kind of pushed into the background after someone would actually listen to the record or see us play.

He was the original drummer? 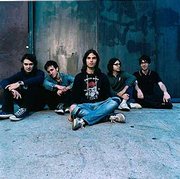 Did it seem like the press was willfully trying to make you into a novelty act?

Yeah. Press can be pretty unforgiving that way. (laughs)

Sure. But not lawrence.com. So with that in mind, since many of us have only heard what the yellow press has told us, give us some background of the band.

Well, we formed in like 1994, late '94, early '95. And we were all just high school kids, and I met Sam [Farrar] the bass player in school, and Jason and Alex [Greenwald] and Darren [Robinson] met each other through friends where they went to school. And Jason and I met randomly at a music store, and he asked if I was interested in joining his band. I went down there and we jammed and it was awesome.

This is your second full-length on Epic?

Our first full-length was on Geffen, and it was just before they were bought out by Interscope. So it didn't really have any sort of push at all. ... The second and third have been on Epic.

How is Epic to work with? Are they giving you a good screwin'?

So all this bad stuff you hear about major labels...

...what's the major label experience for you?

Hmm, interesting. It's fine, really. The whole idea of music business is just a problem. Whenever business is involved with art there's going to be conflicts between the artist and the businessperson. But yeah, everything's been fine. They're really nice. They've allowed us to make records and to go on tour and see the world. It's been amazing.

No, not at all. They're very respectful over there, the people that we're working with.

So you think as long as your eyes are open you can have a good opportunity with a major label?

Tell us about the new record, "Phantom Planet."

This record is pretty much the result of 18 months on the road. We really learned a lot as a band, and as people, touring for "The Guest." And we decided that we wanted to strip down a bit and get more "rockin'" for this record. And we recorded up in a cabin, and it was just the five of us and Dave Fridmann, no distractions. No frills, just rock and roll.

And that was in Fredonia, NY., an Amish town.

Were you surprised to find the electrical power?

(laughs) No, no, not at all, 'cause we met Dave in Manhattan about six months prior to us going to Fredonia. And we were talking about where we were going to record, and he said he had a studio in this small town, and it was fully functional. He recorded the Flaming Lips there, and he recorded Mogwai there. So we knew that it was the real deal.

So you had no opportunities to churn butter? And I'm not talking about, you know, "churning the butter."

(laughs) No, we didn't do any butter churning or taffy pulling or anything.

Your loss, English. So you and the other guys are all born and raised in LA.

So what's it like to be an L.A. band in the whoopty-do L.A. music scene?

It's pretty awesome, to tell you the truth. When we first started, we were 15 and 14, and the idea of getting to play at the Whiskey-a-Go-Go was like the major point. It was like, if we can do that, we've made it. And so, for the first couple months we were just writing songs, trying to get a show there, and then we finally did, then we got more shows on the Sunset Strip. And it was really confidence building because those are legendary places of rock and roll history in Los Angeles.

Are there still a lot of "pay to play" venues out there?

It's still happening, but we were fortunate enough to never have to do that.

What's your favorite town to play in?

I love playing in Chicago. I think Chicago is one of the best rock and roll towns.

It's a great town, but I'm sorry, the correct answer was Lawrence, Kansas.

That's alright. Hey, you guys did a video with Spike Jonze. How freaking cool was that? [ Video available here ]

We've actually known him for many years, 'cause our manager and he used to own a skateboard shop in Chicago before they both moved out to Los Angeles. And we've always wanted to work with him, but he started making movies when we started making videos. And actually, our video was the first video he made since "Adaptation." It was really awesome, and so much fun to work with him. He was so easygoing, and the talent was just oozing out of him.

What else do people need to know about Phantom Planet?

I want people to know that we're five guys from Los Angeles that love making music, and we think that they're gonna love our record. Because we love music, and so we don't want to disgrace it by making it really bad.

Thanks, Jaque. Now go get some sleep.

Thank you very much.