Lawrence artist Cathy Ledeker is in constant motion, circling the teenagers who are surrounding a brightly painted van. She pauses every few seconds to offer advice, check on their progress or just chat.

The van is a warm-up for the Van Go JAMS apprentice artists. Next, they will start a three-panel mural commissioned by the Lawrence Sesquicentennial Committee for the public library. 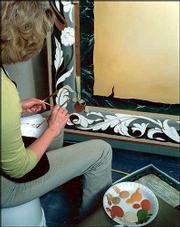 Kathy Hird Wright/Special to the Journal-World

Ledeker is the lead artist for this project, mentoring the teens and helping them design and paint the mural.

An hour away, Ledeker is involved in another library project. She's one of two artists commissioned to design the donor wall for the Kansas City Public Library's Central Library, 14 W. 10th St., Kansas City, Mo. The wall combines calligraphy and illumination, two of the elements Ledeker's art has concentrated on for the past 22 years.

The Kansas City project is a collaboration between Ledeker and Kansas City artist and master penman Mike Sull. Sull is the ninth master penman recognized by the International Association of Master Penmen, and Ledeker is fast on her way to becoming the 10th.

More than 50 donor names will be listed amid the illumination, a term used for the decorative designs surrounding calligraphic text. Illumination is named for the gold leaf often used in such designs. Ledeker and Sull plan to incorporate those elements in their work. The pair will enhance the 8-by-10-foot panel with 23-karat gold leaf. It will hang in the main hall of the library.

The donor wall is part of the $49.5 million renovation to transform the former First National Bank.

"A lot of skilled people are working around each other. I have really enjoyed that part of it," Ledeker says. "It's in the tradition of when artists during the Renaissance were commissioned to do public pieces, which I think is fascinating and there should be more of."

She described both library projects -- the one at Van Go and the one in Kansas City -- as intense and exciting, although the works are at opposite ends of the spectrum.

"(The donor panel) is more dear to my heart than the average commission because of the content. It will be there for generations. It is a classy project," Ledeker says. "(The Van Go mural) is in a different category. It's not about my work here; it's about the kids' work."

The 20 apprentice artists working on the project are still brainstorming ideas for the mural. Once they decide on a theme, they will paint the murals on panels to be installed at the Lawrence Public Library by April 22.

"This will definitely be the most visible project we have done," Ledeker says.

Ledeker has been working at Van Go almost since its inception in 1999. She is part teacher, part mentor and part friend to the students.

"I can come in here and feel so tired and overextended," Ledeker says. "And with these kids, they are so honest and so real, and of course to have any kind of rapport with them I have to be the same way. By the end of the day I usually feel more energized."

The apprentice artists benefit from Ledeker as well. One thing they are sure of is that Ledeker knows what she's talking about.

After checking to make sure Ledeker isn't around, Joel Brummet, a sophomore at Lawrence Alternative High School and Free State High School, says, "She is really informative and experienced. If there is something you could improve on, she is real chill, real mellow about it. She'll give you advice, and it's good advice."

Ledeker says her experience gives her credibility with the kids.

"They recognize my skill," she says. "I'm not just talking about it, I'm doing it. And they can see that and they respect it."