Review :: The Fog of War 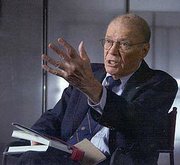 Former Secretary of Defense Robert McNamara has long been thought of as an efficient and cocky architect of war. History has painted him in black and white. In his newest movie "The Fog of War," accomplished documentarian Errol Morris shows us a lot of gray area. His portrait is of a conflicted man, one still coming to terms with his involvement in World War II and the Vietnam conflict.

But what it does even more effectively, is raise complex questions about man's role in that most awful and inherent of human characteristics: our penchant for war.

The subtitle of "The Fog of War" is "Eleven Lessons From the Life of Robert S. McNamara."

Lesson No. 1: Empathize with your Enemy.

Morris has invented a device called the "Interrotron." It somehow projects his own image over the lens of the camera, allowing the interviewee to achieve eye contact with the audience. This enables Morris, along with his 15 years of intriguing work, to get unrehearsed comments from a man about whom much has been written.

Errol Morris' Oscar-winner for Best Documentary examines Robert S. McNamara, a former Secretary of Defense who's been vilified for years as the true architect of the Vietnam War. Despite the fact that this is the director's most interview-heavy piece, the results are riveting thanks to the film's complex, elusive subject.

McNamara's first-hand experiences offer more insight than any history book. "The Fog of War" is not interested in re-telling the facts. Instead, Morris shows those important decisions being made through the eyes of a human being who now knows exactly how he affected millions of lives.

Lesson No. 7: Belief and seeing are sometimes wrong.

Always a stunning visual stylist, especially in the sometimes visually limited world of documentaries, Morris illustrates and interprets McNamara's words with a number of media. We not only see revealing historical footage, but also planned and artfully shot sequences that metaphorically challenge us to think beyond the surface of what is being said. There are tape recordings of oval office discussions with Presidents Kennedy and Johnson that show a more human side of what some historians believe to be truth.

It works on an emotional level, to be sure. But "The Fog of War" is at its best as an intellectual examination of the rights and wrongs of war. What lessons can be learned from the mistakes of the past?

Lesson No. 9: In order to do some good, you may have to engage in evil.

Most Americans know about the two atomic bombs that were dropped on Japan to end the Second World War. But do we know about the hundreds of thousands of Japanese killed in the continuous bombing of many of their other major cities? In Tokyo alone, 100,000 civilians were firebombed. And, McNamara asks, is it right, to kill that many of the enemy's civilians so that 10,000 of our troops won't die?

Lesson No. 8: Be prepared to re-examine your reasoning.

"The Fog of War" allows the viewer the chance to get behind the scenes of history, and should be seen by everybody currently in a position of authority who is faced with making these very real decisions.

Hindsight is everything, and McNamara explains that learning from your mistakes is absolutely essential in understanding how to avoid them later. Maybe current Secretary of Defense Donald Rumsfeld will see this movie and be able to learn from McNamara's mistakes, as well as his own.

McNamara states that, looking back, he now knows that if you cannot get other, rational, free-thinking nations to go along with the cause that you think is right, then you are probably wrong.

One thing is certain, however: