Hack, slash, upgrade, forge and play with a friend...repeat. 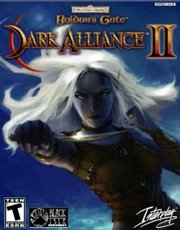 Unlike its cousin release Fallout, BGDA2 is a deeper, longer and overall more satisfying experience. There are weapons you can create and forge, enemies that are smarter, levels upon levels and a sense of accomplishment. Playing with a friend also heightens the Baldur's games to a different level.

After realizing your old favorite characters were captured, you get to select from five new characters. Select the magic-heavy moon elf or man cleric, the rough-and-tumble barbarian or dark elf, or go with the dwarf rogue who specializes in disarmament and stealth.

The moon elf is the only character that stands out as totally original to the series. His "Dark Possession" power can transform enemies into immediate kamikaze allies. This adds a great element of strategy to the game. In fat, like its predecessor, the game is very flexible. Whether you want to specialize in running away and casting spells all day or get up close and personal in the face of death to hack it out, you will be able to express yourself sufficiently.

A welcome addition to the game is the new forging system. By collecting forgeable items and rune stones, you can go to Bartly's workshop and create weapons, items and even trinkets. The rune stones make the weapon or item more effective. You can get creative with gems as well. Each of the fourteen gems have a specific property, and when combined with a different type of gem or rune, can make a completely different weapon. The customizability is pretty immense.

You will resort to button mashing, though. You can't get away from Baldur's true nature. But that's okay. Unlike Fallout, BGDA2 goes that extra mile to make the 80-level journey rewarding and interesting. That can be hard to do. What is keeping it back is that it's nothing far beyond what we experienced with its predecessor. Despite the new workshop, it feels all too familiar.

The graphics also look like they haven't been upgraded. It does look a lot better than Fallout, which runs on the same engine, but still doesn't look up to par with 2004 releases. The sound is wonderful. High rate samples and sound effects ping all over the place in the button mashing intensity. Well done.

I wanted more innovation out of BGDA2. I got a little, but the formula was basically the same. Still, it proves to be a ton of fun, no matter how tired you made your old Baldur's disc. And make sure to play with a friend to get the most out of it.