Fallout: Brotherhood of Steel is a typical hack-n-slash game. Of course this one is set in a nuclear future with most humans escaping to underground vaults. Not you, though. You stay on the radiating surface and try to be the renegade hero that combats all the mutants that have come into existence. 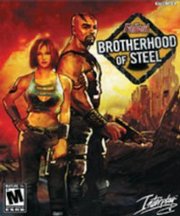 Those who have played Baldur's Gate: Dark Alliance will feel right at home with the set up. Most of the game is played from the top down perspective. Like Baldur's Gate, you go around various locales, killing and finding new weapons, armor and items to make your character advance in experience. There are occasional exploration missions to be had, communicating with various characters to learn hints, but in general this game is designed to satisfy the Gauntlet lover in all of us.

For the most part, it's decent fun. You have plenty of options for ranged weapons and melee attacks. For each, you can lock on to an enemy to quickly dispatch them. However, you won't be able to move around as fast while you're in lock on mode. This is an attempt to balance the luxury of locking on. It seems a bit clunky at first. It can get stiff when three enemies are attacking and you are trying to kill on locked-on enemy. You must get used to your roll ability while locking on. It's the only was you will survive many later battles.

The bosses are pretty fun, if entirely too predictable. Anyone who played the old Smash T.V. on the original Nintendo will get attached quickly. But like the old app, the boss fights are over too soon and the only truly hard battles are saved for the bitter end of the game. There is no step-up in difficulty along the way, which is disappointing.

The graphics are dated. The original Baldur's Gate engine was used, and it shows. Now, this isn't necessarily a bad thing; it was good for its day. But that day has passed. The look is clean, if too musty. The character designs are sleek but with the far away top-down perspective, you may not be able to fully appreciate what's there.

There is a lot of over-the-top voice acting in this Mature-rated title. Tons of vulgar language and innuendo abound in a pretty clumsy fashion. The shock value is non-existent because of the amateur execution. The sound effects are fine, as if the developer found a sound bank entitled "Action game." It's exactly what you'd expect. The music is sparse, literally. There is hardly as tune to be found to encourage you to get in the slashing mood.

There are all the right elements here for a good game, but nothing more. Nothing was done to make this surpass all those in its genre. It's a shame, because the premise is there. If you are looking for a sub-ten hour romp through mindless monster fury, then this should do for a nice weekend rental.