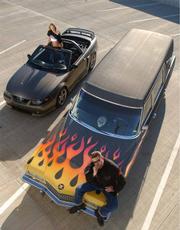 It seems like the people who know the most about cars never actually have to say the word 'car.' Like plumbers or fishermen, car junkies have their own jargon that keeps the uninitiated at bay. For rookies, walking into a custom car shop can be a lot like entering a foreign country.

"It's like going to The Bottleneck -- it's a whole 'nother class of people," said Rob Wendland, a professional drag racing mechanic and owner of Wendland Performance Services (26th and Iowa). "You probably won't see some artsty-fartsy guy who likes to go to museums at a car show."

But within the larger Lawrence car culture, a plethora of subcultures are gunning up their engines for summer. The "tuner" cars will soon cruise down Mass. Street in all their Neon-tinted, nitrous-powered glory. Though these 'bling'ed-out import cars hold sway among today's youth, they don't impress the Punk Rodders -- a tattooed group of antique car corruptors that share a motto of "Low, Loud, Fast and Ugly."

"I have to point and laugh at them -- I can't help it," said Stacy Daugherty, a punk rodder who drives a flame-painted '75 Cadillac hearse. "It's like the entire car is powered by aftermarket crap they bought at Autozone ... I don't care how much neon light you put inside of it, on it, around the tail pipe, whatever -- it's still a friggin' Civic."

"I'm really glad to see kids start that type of hobby," Wright said. "The neon, that's really not my thing, but you know, it's different strokes for different folks."

Subs and rooster fights
These days, there's more ways than ever to "trip your trigger." From $2,000 custom wheels to backseat nitrous tanks (to boost horsepower), car accessorizing has become a popular -- and profitable -- industry.

"This is a money pit," said Sunny Damani, a manager at Sam's Food Mart who's invested more than $15,000 into his 2001 Mitsubishi Eclipse Spyder (which cost him $30,000 to begin with). "I have more than 40 modifications on this car, from exhaust to cold air intake, from nitrous to down pipes, from audio system to subs, from Playstation 2 to gauges ... but it is never enough. I am right now not completely satisfied, because I still want another TV."

Damani, who attends car shows and charity events with a KC-based car club called "Imprims," said the movie "The Fast and the Furious" inspired him to accessorize his car.

"(The car) was all stock when the movie came out, and I was like, 'Damn, can we really do that kind of stuff nowadays?'" he said. "I said to myself that I was only going to put on Euro tail lights and a spoiler and wheels and that's it and I'm going to stop spending money, but sooner or later..."

"I just save up all the money I have -- from birthdays, Christmas, all that stuff," Graves said. "A lady in a van T-boned me; totaled my car out in Lee's Summit ... I was heated."

Within the industry, Graves' and Damani's cars would be considered "tuners": new cars with "tuned" engines and aftermarket goodies heaped on. Tuners are the reason businesses like Quantum Exile, a custom car audio shop on the southeast edge of Lawrence, are thriving.

"You're doing stuff that the vehicle was never intended to do," said Quantum Exile owner Andy Sampson. "We've got an Eclipse sitting outside that I'll put against anything in '2 Fast 2 Furious.'"

Though tuner owners often soup up their engines with aftermarket air intakes and nitrous tanks, Sampson said he didn't think speed was the main attraction.

"It's more for bragging rights -- you know, you get two roosters in a pen, they're going to crow to see who's the loudest," Sampson said. "People are doing a lot of improvements that street racers do, but that culture I don't think is in Lawrence, and if it is, I haven't seen it. I think here you've got more of the cruising."

With twelve 12-inch speakers in the back of his car at age 16, Travis Ussery was probably crowing as loud as anyone. Ussery, now 27 and a salesman for Quantum Exile, spent $8,000 on his most recent stereo system, which he considers just "the bare minimum."

"I was never a popular kid, I didn't have a lot of friends, so that was my way of kinda getting attention," Ussery said. "I wanted people to look at me when I drove by 'em; I wanted them to feel it inside their car the way I did." 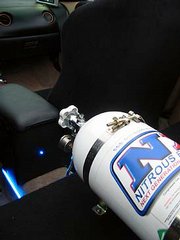 "Life's too short to live your life soft."

Anarchy in the LK
If the "tuners" represent mainstream America's car obsession, then The Punk Rodders are the anti-establishment. The club, which boasts more than 30 members from Lawrence and KC, is united by its members' affection for punk rock music, barbecues and bad-ass hot rods.

Each member's rear window is adorned with a Maltese Cross, crafted from an old license plate and lettered with "Punk Rods." The group's most visible vehicle in Lawrence -- a black hearse with flames engulfing the beastly hood -- belongs to Daugherty, owner of Big Daddy Cadillac's tattoo parlor.

"Just like punk rock music ... you drive a car that popular American culture is going to turn their nose up at," Daugherty said. "Anybody wearing Abercrombie, Old Navy or anything like that ... doesn't get in the club, period. Same thing if they drive up in some Honda Civic with a trash-can exhaust that sounds like a fat woman farting in a bathtub."

With his 1975 hearse, Daugherty boasts the club's newest car. Most of the punk rods date back to before 1950, and as long as they're running, the cars' owners don't put too much weight in keeping them immaculately clean.

"We're not worried about polishing the fenders -- we want to get out there and run 'em and have fun with 'em," Daugherty said. "People who've got these $150,000 trailer-queen hot rods like you see in a lot of the magazines; they don't drive these things ... It's sculpture, it's not really a car."

With a 500-cubic-inch engine (translation: 8.7 liters), Daugherty's hearse could qualify as a "sleeper" car on the race track: not too threatening at first glance but a beast underneath the hood. Though he street-raced in his younger years, Daugherty swore it off when he got tired of paying speeding tickets and high insurance bills.

"I'm not about going around drag racing everybody, but I want to know the throttle is under my foot when I want it," he said. "Once in a while, if I'm rolling down 23rd Street and somebody comes up beside me and wants to play, I'll drop gear one, nail it, and leave them standing there. Then I'll pull up to the next light and they'll roll up beside and give me the goofy eyes, like, 'What the hell just happened?' and I'll just putt off on down the road."

Street legal
Whereas the punk rodders value thrift and utility, the two dozen members of the Lawrence Street Rod Association spare no expense (time or money) when it comes to building their fantasy cars. Many of the vehicles run upwards of $30,000, and unlike the "tuners," most are built from scratch. Though these "Grease"-worthy hot rods rarely see the roads on account of their value, they're sure to turn heads when they do.

Though older cars like Bryan Sorenson's purple '34 Ford hold sway, the association has also welcomed a few "tuners" into the fold.

"We've opened it up to take in some of the newer style cars because the real old ones like what we have are getting pretty hard to come by," said Sorenson, the chairman of the association's annual Rod Run. "You just don't see 'em anymore because they're just about all taken up."

Sorenson, who owns five street rods (all bought cheap and restored), said there was probably a lot of truth to the perception that middle-aged men got into street rods as a way to reclaim their youth. 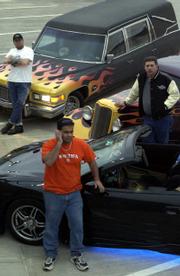 "Once a guy gets in his 40s, my feelings are that they always would like to have the very first car that they owned," he said. "I was talking to a guy the other night that actually bought back the car that he had proposed to his wife in 30-some years ago."

Street Rod Association president Carl Friedrich, 57, said he believed much of his generation's work ethic with cars was lost on the younger generation of "tuners."

"You just go to the right place and you just lay your money on the counter and you can have anything you want," he said. "Maybe people enjoy that ... but part of the enjoyment for me is finding something that really is an absolute rust bucket and then working and working and working to a point where it's a $25,000 pickup."

Owning a nice car does come with one major drawback, however: not being able to drive it without worrying about it getting messed up.

Lauren Ochs, a KU student who lives in Olathe, said she never even drives her 2001 Roush Mustang Stage 3 convertible to school.

"Normally I drive an '86 Toyota Camry with a big rust dent in the back," she said. "This past weekend I just turned (the Roush) over to 10,000 miles and I had to stop in the middle of the road and take a picture of it."