The Mega Man RPG's have been somewhat of an anomaly. Out of an action game comes a popular and competent role-playing experience. Capcom branches out again to combat the Yu-Gi-Oh hysteria with its Mega Man battle card game. 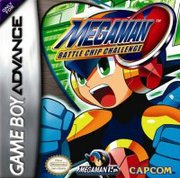 And boy is it a piece of work. Well, actually, work is the wrong word to use, because you won't be working much at all.

First, let's review how to play. You choose from six playable characters and become their Personal Electronic Trainer, or "PET." You collect battle chips and bring them against another player's deck to see who can bring the most powerful combo to the table. Certain chips trump other chips in this well-balanced system.

Sure, each of the six characters has a different story to tell, but with the limiting and rushed nature of this game, it might have been better suited to just include the cartoons of each story so we can passively watch them progress. Essentially, that's what you're doing.

The graphics and sounds look and act exactly like a Mega Man Batttle Network game. That isn't so bad, but it doesn't push the Game Boy Advance to any extreme. And with as much spectating as you will do, there needs to be something better to look at and listen to.

I don't get it. This is fun? This is interactive entertainment? Capcom: file under "oops."