Other people's stare :: Exhibits bound by obsession and the body 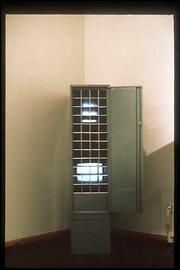 Obsession and the human body tie together the artwork of Lynn Tatum and Greg Ornay.

Tatum, a metalsmither, spends hundreds of hours weaving wire into exaggerated jewelry forms that ultimately restrict and burden the arms, legs and necks of those who wear them.

Ornay uses video installation with elements of sculpture and performance art to illustrate American media's fixation with the "ideal" body and the adverse effects that hard-to-attain image has on people -- like himself -- who are obese.

Tatum and Ornay, both Kansas University graduate students, will show their work in tandem March 29 through April 2 at Kansas University's Art and Design Gallery. A closing reception will be from 5 p.m. to 7 p.m. April 1.

The exhibition is the second in a series of shows featuring works by students graduating from KU with master of fine arts degrees.

Tatum's show will include seven to 10 major pieces, most of which she created in the past year. Though her work is grounded in the rich history of jewelry and metalsmithing, it might look more like sculpture to some observers.

"They're not things you'd find, say, in a jewelry store," she says.

The central piece in the show, "Monomanical Binding," consists of copper wire woven into a 10 1/2-foot-long rope whose ends open to accommodate the wearer's arms. It reads simultaneously as art and imprisonment, and in some ways it was both for Tatum, who spent 400 to 500 hours on the piece.

"I could create a piece of this material 4 inches long, but it's not going to have the same effect on the viewer at the small size," she says. "I think to get that compulsion across, it has to be large and obviously time-consuming."

Ornay's work tends to focus more on societal compulsions than personal ones. His eight- or nine-piece show is grounded in the idea that society singles out obese individuals, and that media in particular poison people's concept of what it means to be overweight. 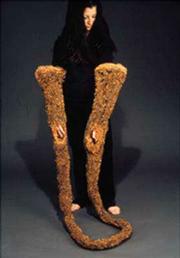 A model displays a piece of jewelry by Kansas University graduate student Lynn Tatum called "Monomanical Binding." The 10 1/2-foot-long woven copper chain acts as both bracelet and manical and represents elements of compulsion. Tatum spent 400 to 500 hours creating the piece.

"I believe that children are conditioned at an early age by television to embrace the image of the ideal body as 'normal' and any other body types and those individuals as being either sick and unhealthy or weak and lacking self-control," Ornay writes in his artist statement. "In the midst of this duality, the child's mind and behavior is also shaped by unconsciously eating in front of the television.

"The television becomes a surrogate parent, dispensing both morals and images of food, comforting and chastising until the child is pacified."

Ornay communicates his ideas using a wide variety of materials to build installations that are often combined with video. In "Other People's Stare: Self-Portrait," a piece he created in 2003, two television screens -- one above the other inside a locker-like cabinet -- project images of Ornay's own body. The top monitor shows his head, the bottom monitor his belly.

"When people look at each other, they section each other up and stare at certain parts and not the whole body," he says.

Though the subjects Ornay confronts in his work began as personal explorations, they've expanded to become broad societal commentaries that he hopes people connect with.

"(Obesity) is something I deal with everyday. It's everyday life, but it's kind of taboo. ... It's looked at but not talked about.

"(The work) is really to open up the public's eye and make them think about it."

The following exhibitions of work by Kansas University students graduating with master of fine arts degrees will be on view during March and April at Kansas University's Art and Design Gallery: