Jim Brothers takes a rare moment to be still, smiling as he surveys the creative chaos around him.

Shelves filled with colorful projects form a ring high above the airy room. Some works have lived a long life; others are new. An occasional cobweb stretches from one or two. Below, clay figures in progress stand ready, willing themselves next in line.

"This is home," Brothers says, describing his Lawrence studio. "If you can't find me, you probably haven't checked here."

The 62-year-old sculptor has been discovered by many. His work is exhibited around the world, winning national and international honors alike. But Brothers, who was recently named featured artist for the 2004 Lawrence Art Auction, says local awards are special.

"It means an awful lot to be recognized right where you live," he says.

Brothers grew up in Eureka, a small town in the Kansas Flint Hills. Art was deemed impractical there, he says. His high school didn't offer even an introductory class.

"I was the only kid in that little school who drew," he says. "Not having art class made things hard for me. I would have loved having a Lawrence Art Center like the kids here do now."

But Brothers was not deterred. His aunt, artist Marti Davis, encouraged the young man to pursue his creative passion. With her help, Brothers found his way to Phillips University in Enid, Okla., where he earned a bachelor's degree in fine arts.

After graduation, Brothers' free spirit took flight. He floated from job to job, dabbling in commercial illustration and teaching high school art. He began a master's degree at Kansas University and then set out for the West Coast to establish himself as an artist, moving back and forth twice. 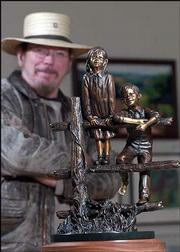 Lawrence sculptor Jim Brothers is the featured artist for the 2004 Lawrence Art Auction, set for April 24. Brothers is pictured with "Promise," the bronze casting he donated for the auction.

"I just couldn't quite find my place," Brothers says.

It wasn't long, however, before Kansas lured him home.

"I realized how beautiful and wide-open it really is here," Brothers says, reminiscing about his days as a teenage ranch hand in the Flint Hills. "This place is what I know."

After returning to Lawrence in the '70s, Brothers discovered a love for history, something that now permeates his work. He is especially interested in recognizing veterans; his bronze sculptures "Scaling the Wall" and "Death on Shore" are part of the National D-Day Memorial in Bedford, Va., and another work -- "Citizen Soldier" -- stands at the Veterans of Foreign Wars national headquarters in Kansas City, Mo.

"I just think we should honor veterans every chance we get," Brothers says. "They are what this country stands on."

Brothers also gained attention for another historical work in 2003, this time in Washington, D.C. His bronze likeness of Dwight D. Eisenhower was placed in the U.S. Capitol's National Statuary Collection on behalf of Kansas. Eisenhower, a U.S. Army general who led the Allied invasion of Europe and later became the nation's 34th president, was raised in Abilene, a small town in the central part of the state.

"Jim's artwork speaks for itself," Mitchell says. "He puts a lot of heart and thought into his work."

Brothers was chosen for the honor by auction board members, who select a different artist -- varying in gender and artistic medium -- each year.

The 24th annual auction, billed as "Live on Stage," will be April 24 in the art center's theater. It will feature works by about 200 artists who have donated pieces to support the center's gallery program. Last spring's event raised more than $62,000.

"Most of the money supports our gallery exhibitions," Mitchell says. "We host 15 to 17 per year."

Each gallery show costs the center about $5,000.

As featured artist, Brothers' donated work -- a bronze casting titled "Promise" -- is currently on display at the center. Work by all donating artists will be on view during a preview exhibition that opens Thursday in the gallery.

Brothers' piece is a small replica of a life-sized sculpture he created for the Kansas governor's home in Topeka. The miniature version is valued at $3,400.

"It's a neat piece, and I thought the fact that it featured two kids went well with the arts center's goals," Brothers says.

The two children who posed for the original sculpture were Katie Graves, daughter of former Kansas Gov. Bill Graves, and Sam Bear, a young boy who lives near Brothers. They are shown perched on a wooden fence together, peering out into the Kansas prairie.

Back at the studio

All this talk about art has gotten Brothers fired up.

He's dusted off his trusty slide projector; images flicker on a battered screen.

"Oh, this guy was something," he says, pausing on a slide of an old friend clad in a crisp military uniform. "He was wounded three times in the war -- three times -- and lived to tell the tale.

"He's a bunch of sculpture ideas all by himself."

Of course, visual art isn't the only creative medium that interests Brothers. As a rhythm utility man with the Alferd Packer Memorial String Band, Brothers enjoys channeling his creative energy into music.

"I'm not great, but I make up for that with excitement," he says, grinning.

The local band, which has been together for 25 years and specializes in toe-tapping tunes, will perform before and during the art auction.

"Alferd Packer, you know, was a famous cannibal," Brothers says. "So we like to joke that we 'decompose' music.

"You can tell we're not too proud to poke a little fun."

Brothers sits back and has a good laugh. Art, after all, is about living, he says: Both come a little easier with a light-hearted touch.