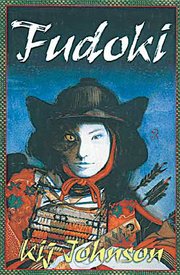 The idea of a protagonist going through a rite of passage is probably the oldest story line in human history. Whether it is an African boy losing his virginity, or an American girl moving out of her parents' house, a major change in one person's life has always been a ubiquitous theme in literature. Often, the forces that drive these changes are as important as the changes themselves.

In her sophomore novel "Fudoki," Kansas author Kij Johnson skillfully uses Japanese myth to tell the story of a dying princess's final thoughts. To cope with her death, the princess tells a story of a cat who becomes a woman named Kagaya-hime. As she reveals more about her past through the story, it becomes clear that the Princess is also evolving. Although the meaning of the tale is initially nebulous, "Fudoki" soon becomes a clear testament to how we live our lives and what message we leave behind.

The Princess's story begins with a fire that ravages the home of a small cat. The fire destroys the cat's fudoki, a term used to describe the cat's ancestral history. Everything the cat knows and loves is destroyed, forcing her to find new shelter and companionship. The cat journeys far from home, and is soon transformed into a woman by a vengeful god. Though the cat-woman (later named Kagaya-hime) struggles with her new identity initially, she is eventually able to reconcile her human and feline traits to her advantage. Soon she begins to travel with a group of generous royalty, making love to numerous men at night and fighting alongside them in violent battles during the day.

As the Princess tells the story, it becomes clear that Kagaya-hime is living the experiences the Princess dreams of. The Princess has given Kagaya-hime an independent spirit and the will to do what she chooses, instead of what is her duty. Although the Princess has led a privileged life, she feels her time on earth has been meaningless. She regrets not being open with former lovers and relatives, choosing instead to compose empty poetry that she despises.

Readers can track the Princess's rite of passage as she grows internally, while dying externally. As the Princess writes, she becomes less selfish and is more aware of the world around her. She begins to admire her servants and respect their talents. She also is finally able to confront buried emotions and experiences.

One of the most poignant rite of passage scenes comes when the Princess runs away. After struggling to keep warm and avoid hunger she reaches the farthest point she has ever been from her palace. Up until now, her barrier from leaving has always been a supposedly mammoth wall at the edge of the city. However, upon reaching the wall, she finds it to be only a foot high, and realizes she could have crossed the entire time. Throughout the novel, Kagaya-hime laments the loss of her fudoki, because she thinks her fudoki is the only thing that can make her feel complete. For that reason, Kagaya-hime never feels at home, even when surrounded by humans who love her. In the end, of course, Kagaya-hime discovers that her new comrades are her fudoki, and she accepts that she will never be with the other group again.

Perhaps some of the loveliest scenes in the book are the battle scenes. It takes a skilled writer to describe horrendous war scenes with grace and beauty. Ann Patchett proved to master this when she wrote the story of a hostage situation in "Bel Canto." Johnson can be similarly commended for her gentle descriptions of fire and war in 12th century Japan. Even with the graphic nature of war, Johnson uses Japanese subtlety to accent the emotions of the fighters.

"Fudoki" is not for readers who appreciate a lot of action and emotion. Instead of grandiose scenes, Johnson uses delicate language to parallel the changes in two very different women. Although the novel starts out slowly, Johnson's lyrical prose and masterful storytelling help turn a pedestrian tale into a marvelous Japanese myth.