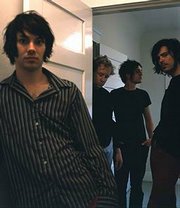 Let's get one thing straight: There's nothing dark about The Darkness. To digress momentarily, that fey singer doesn't come remotely close to being the heir to Freddie Mercury either. Freddie's falsetto was purposeful, not used because he couldn't hit high notes. Anyway, they're not dark. The first Batman movie wasn't dark. It was supposedly based on Frank Miller's The Dark Knight Returns (DARK!), but thanks to the damp, pasty hand of Tim Burton, all darkness was exorcised before its release. The point, if you can really call it that, is that it's high time that people were reminded what darkness is. Not vanilla prurience like CSI and SVU; shows that allow mainstream America to tell themselves that they're watching violence for "the science." Not self-conscious, masturbatory violence a la Eminem. Real darkness. Hangin'. Drownin'. Shootin.' Remember? The fun kind. Take a trippy trip down memory lane (at the end of which there's a house where Jodie Foster hid her victims' bodies) with Low Flying Owls. lawrence.com spoke with Jared Southard as the band drove through Tejas, dispensing their Elixir Vitae.

lawrence.com: Sacramento was actually the home of the Bradford family of "Eight is Enough." Are there monuments to Dick Van Patten all over the place?

Jared Southard: (laughing) Actually it's kind of swept under the rug, I think. Nobody really talks about it. Kind of funny.

See what you can do about that. Unless you're scared of them stealing some of your thunder.

I think we'd be more proud of it if they'd actually filmed it in Sacramento. But no. (laughing) Nobody cares. I guess the overhead shot in "American Beauty" is Sacramento. So there ya go.

Instead of inspirational family dramas, you're proud of sick films about violent sexual deviants.

I don't know what's wrong with you people in Sacramento. Nice town, though?

It's small. It's a small town. I hate the summertime, but it's beautiful during the fall, and I love the winter there 'cause it's not too bad. And the spring is pretty nice too. It's okay. It's a conservative town, and culturally could do better, and I think that's kind of what's lacking from it. But other than that it's an okay town. Not bad. I think a lot of people give it a worse rap than it deserves.

No, no. I think that people go, "Sacramento! What is that?" or "Cowtown." And there's an arts district. The downtown area's got a good art scene, and there are some good bands coming from it. But seasonally I could do without, and it is conservative.

Are you guys too gloomy for California? Even in your press photos your drummer is holding an umbrella.

(laughs) Actually that umbrella's protecting our drummer from the sun. So you got that one backwards. He can't be in the sun. He's like the invisible man. When we go out he has to wear a bunch of clothes. He's crying right now, let me tell you. (the band was driving through Texas at the time of this interview) He wears gloves in the summer. He's like Casper. All of us are pretty dark, dark hair, and he's the sunshine child.

But you say you love winter. Granted, it's winter in Sacramento, but it's winter, and your subject matter is pretty dark.

I was tortured as a child, so it basically just comes out.

Okay, that's fair. Do you want to name any names?

(laughs) No, those are confidential. My psychiatrist is the only one who knows all those names. (aside: Are we going the right way? Is it 75 North we're supposed to go?) Alright.

What makes you glad to be alive? (This is an ingenious reference to the first track on Low Flying Owls' new record!)

Why does everything I read about you say how dark you guys are? I find you utterly delightful.

I think that there's an element of just finding an outlet for dark, twisted subject matter, and you kind of release it and get rid of it. It's not like you hang out with us and we crucify virgins. We definitely have dark, dark, dark humor, and other than that we like the balance of depth and the lighter side of things. We've hung out with people who are way too involved in the serious, and we definitely don't take ourselves too seriously, that's for sure.

So your fans are in no danger?

No. Not unless they take a lot of acid and listen to "Swingin' Sam."

Swingin' Sam. I'm not familiar with that.

It's the second track on our record.

I guess I should pay attention. I thought it was a band name.

No. It's a good band name though.

Yeah, it's not bad. Is there a routine that you follow when you're writing?

My main writing method for myself is an acoustic guitar. I keep a journal day to day. I like to write poetry and thoughts in a notepad. Sometimes I've got a ton of writings that I can just throw -- or I'll be strumming the acoustic guitar and feel like, "Okay, this kind of fits the lyrical feeling of something I wrote before," so I'll put 'em together. Otherwise, sometimes you have a half-hashed idea, and Andy [Wagner] comes up with some stuff on guitar sometimes, or we don't have it all together, we'll bring it in to the band, and we fill in each other's holes quite a bit once we get into the studio.

(laughing) Yeah, don't write that. Filling in each other's holes is probably not a good thing to write. Mockingbird! That's funny.

Tell me about Elixir Vitae, the album and the fluid. In my "research" I came across everything from references to the fountain of youth to Semenex/¢, a substance that's supposed to make semen more palatable. 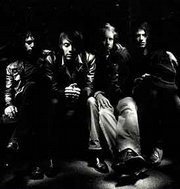 That's probably not what you were talking about though.

So tell me all about the new record.

We recorded it last summer, pretty much, and we were kind of in transition. We had gotten to a point where we were just kind of -- we started recording just for fun. Then it became more serious. We had no idea it was going to turn into a record at first. And an engineer that we were working with, a friend of ours, just decided, he said, "Hey, let's just go ahead and do another song. Let's do another. Okay, let's do another." So it just came together that way. What else? Elixir Vitae. It just kind of felt like -- it was definitely an outlet for me, a relieving therapy, to go in and get these songs out, and that's kind of where the elixir vitae comes from. And it just sounded cool too, so we just decided to go with it.

It has nothing to do with Harry Potter at all?

No. No magical Harry Potter reference. But we do feel like it's magical.

Are you sure? Because you've got the whole owl thing, and now this elixir business. I don't know what to think.

That's bizarre. I don't think anybody's read the Harry Potter. Or "Lord of the Rings" through here. Yeah, Harry Potter.

What do you need people to know about Low Flying Owls?

It's pure. It's very pure. It comes from deep inside, and there's a lot of synthetic bands out, especially right now, that they've jumped on the whole -- I don't know. I just get tired of seeing this retro rock bandwagon all over the place, and I think we just have so much more to offer than some sort of radio-friendly '70s rehash. Our music goes a lot of different ways, and I think that actually this last album was a real growing period, and I think the next record we do is really going to be -- 'cause we've been writing the new songs and we've been working on new stuff, and I think that it's truly going to be a much more mature sound, and it'll be the record where it's just like, "God, we finally found our identity." And I think the other couple albums we've done have just kind of been growing and kind of seeing what exactly we can do together. It's an interesting album, and it's cool to turn up LOUD.

But it won't turn semen into a sports drink.

No. I betcha that sports drink would do good in the [World] Wrestling Federation, though.

All of a sudden John Peel is playing your music on BBC 1.

Yeah, John and I go way back. Mr. Peel and I are tight.

No, I'm kidding. It's great. It's good. Really good. We can't wait to get over there, it's so ridiculous. We actually got played by Peel first, and then Lamacq, Steve Lamacq.

I don't even know who that is.

He's kind of like -- you know, Peel's kind of the history of BBC Radio 1, and then Lamacq is kind of like the hip, younger, edgier, ear-to-the-ground guy. So he started playing us, too. So we're really curious to see what happens. We've been looking for a European record deal, or a UK record deal, and it definitely has not come as fast as I thought it would come. There's people interested, but I think there's other people in the way of makin' it happen. So I don't know.

They should be more respectful. You're American.

We kicked their ass. And got our independence.

We freed ourselves from their tyranny.

They're a little bit shaken.

So you, or more specifically your music, are on the current episode of "The Sopranos?"

Yeah, just this last one.

That's pretty cool, because people really watch that show, for some reason.

It's in the strip bar scene too, which is even more exciting.

No kidding. At Bada Bing!?

Yeah, yeah it's at Bada Bing!!

We had a strip bar in Lawrence that was called Badabings or something. It replaced Juicers, so I guess it was a step up.

That's [Bada Bing!] gotta be the best strip bar name in the world.

Did you all get together and watch the episode?

We tried to. We ran in to a Motel 6 and we caught the last ten minutes, we missed it. We had a show that night so we went and sound checked and got dinner, and we didn't know the different time changes out here as far as the programming goes, and we missed it. Oh well. We've got a bunch of people at home taping it, so I'm sure we'll catch it.

Along with Sopranos Fever!!