A mixed bag of fresh new ideas and locales with marred balancing.

Battlefield 1942 burst onto the MMOFPS scene, rewriting the book on multiplayer warfare. The maps were mostly well-designed and the overall gameplay was incredibly balanced. It was a PC gamer's wet dream. 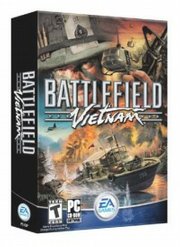 Now we have the Vietnamese rendition. It's quite a touchy area to make an interactive game from, but its atmosphere succeeds nonetheless. Where it fails to meet 1942's brilliance is in the design of levels and variety of personnel.

One of the complaints I had with 1942 is that you could sneak around the major battle bottlenecks to get to the heart of the flag or objective. Not only does Vietnam continue this sad trend, but augments this disappointment with seemingly random level design. Sure, the new jungles and tress and tropical foliage add an interesting stealthy (and annoying when you can' figure who is shooting you) element, but the major bottlenecks for battle seem less obvious and much less interesting. It looks great at first glance, but just doesn't give you that 1942 "wow" factor.

The new weapons and vehicles are nicely crafted. From dropping napalm from a plane to riding passenger side while displaying your M-16 skills to piloting the ever-so-intuitive helicopter, you're guaranteed new experiences that were just not possible with 1942. This is where Vietnam shines.

However, like many gamers, I loved being a soldier in 1942. Any advantage the regular soldier had in 1942 is completely gone. Most every U.S. soldier comes readied with a rocket launcher and heavy machine gun. Wow. This makes the game's pace take a big step up, but the variety between characters takes a mighty hit. Still, the gameplay is solid enough for good strategy-planning between character types.

The single player mode is pitiful. The AI was dropped off from the short bus at the last minute. Countless times the Vietcong were at my flag but basically ran circles around it, waiting for me to kill them. Combine that with them running into random objects, you feel like you're playing a school for the blind. But hey, this game wasn't made for a single player experience anyway. I am surprised it's even there.

The sound engine has been completely revamped with new voices and effects that pierce patriotism into your soul. Okay, that was a bit melodramatic. But being able to play some good 'ol 70's wartime music in the vehicles really adds a heavy dose of nostalgia. Oh wait...I wasn't in Vietnam. Regardless, the sound work is phenomenal.

The graphics look so much better than 1942 (the game, not the year, ha!) It's cleaner, more colorful and there is much more seemingly going on, even though the layout is pretty blah.

Hmm. I'm not sure how to recommend Vietnam. I suppose the new vehicles and weapons justifies a purchase for the die-hard 1942 fans. But if you are an Unreal Tournament fan wanting to see what all the Battlefield franchise hubbub is about, you may want to save your 5000 pennies.