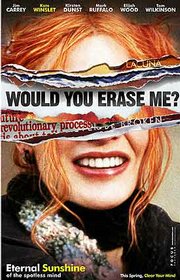 You are your memories. They define you. Attraction is something not to be trifled with, a dangerous thing.

"Eternal Sunshine of the Spotless Mind" is the amazing new collaboration between writer Charlie Kaufman ("Being John Malkovich," "Adaptation") and director Michel Gondry ("Human Nature"). Jim Carrey, cast way against type, is excellent as Joel, a shy and inward man incapable of initiating contact with a woman. We hear talk of Naomi, his fiancee, but we never see her. Instead, we meet the eccentric Clementine (Kate Winslet), no jokes about her name please. An inevitable pull between the two slowly develops.

As with many of Kaufman's screenplays and Gondry's music videos (Bjrk, Chemical Brothers), "Eternal Sunshine" relies more heavily on atmosphere and hidden meanings than on any sort of traditional structure. The first and third acts are relatively sane, narration-wise, but also very short. The old-fashioned notion that the thrust of the story must be obvious is erased like an unpleasant memory in favor of a surreal, puzzle-like middle act.

I have to stress, however, that "Eternal Sunshine" is not just weird for weird's sake. There is no hairy midget baby, no darkly shrouded Satan woman, and no naked mystical Indians to be found. More time is spent on the universal themes of loneliness and need, and how Joel and Clementine are perfect together because they will never be perfect for each other.

I'm sitting here and I just forgot every single thing I was going to write. Did you ever notice that since Gene Siskel has died, Roger Ebert gets first billing with "Ebert & Roeper"? I wonder what Siskel would have thought of "The Passion of the Christ"? I can't remember if he dug that pretentious Oliver Stone movie "The Doors," featuring Jim Morrison's spiritual naked Indian guide.

After a fight with Joel, Clementine impulsively has him erased from her memory. Kirsten Dunst plays the secretary at Lacuna, Inc. and Tom Wilkinson plays the doctor in charge of giving his clients "selective" brain damage. In this absurd mind-trip, it is only natural that a company capable of non-surgically erasing entire sections of painful memory is located in a nameless building in Manhattan, New York. That is Lacuna's specialty, and the legality of this service is never questioned. There isn't much money involved in giving their client's a supposed "clean slate," otherwise they'd be operating out of some fancy office. They would be living in some way nicer digs. Obviously, that is not the point. Don't ask how.

Eternal Sunshine of the Spotless Mind ****

A mind-bending journey through the memories of Joel, played by Jim Carrey (free of all the tics he has displayed in his wackier fare), who is struggling to reclaim what he realizes may be the fiber of his being. An anarchic spirit runs through the entire film, and redefines the rules of traditional structure. This, director Michel Gondry's second collaboration with screenwriter Charlie Kaufman makes the surreal aspects of Kaufman's earlier scripts ("Being John Malkovich," "Adaptation") seem tame by comparison.

Editing this movie must have been a huge challenge. Writing this review is a daunting task. Summing up the story of "Eternal Sunshine of the Spotless Mind" in a straightforward manner may be difficult. Director Gondry has made this review available to you sometimes in fragments that can be pieced together at your own pace. Subscribe your own meanings to some of these opinions.

One painful memory: when Joel was young, his mother caught him diddling under the covers to a comic book. This brings back some memories for me, since I grew up listening to KISS. Not supposed to use "since" unless the next sentence directly relates. I read a lot of comic books, like "Red Sonja," the female counterpart to Conan the Barbarian. Armored bikini. Clementine, as an adult, is inserted into Joel's memory of himself in bed, clad in a "Love Gun" KISS T-shirt circa 1977. And there's Mom. That particular brand of humiliation is universal.

I have always wanted to write movie reviews for a living. Even as a young kid, I used to love to watch Gene Siskel and Roger Ebert battle it out while discussing their passion for movies on PBS' "Sneak Previews." This is before it went into syndication as "At the Movies with Siskel and Ebert". That may not be the correct title, though. We never see what Joel does for a living. It is not important.

"Eternal Sunshine's" visual style is very flat, until Joel's memories start imploding on each other. As one scene begins, another seen scene seems to invade, only to reappear in a slightly different context in the next seen. Even then, the lighting is sparse, and the colors remain dull. But as Joel's older past gets mixed up with his more recent past, Gondry's visual bag of tricks spills all over Joel's memories.

Your memories define who you are. The mutual attraction that pulls two people together is too strong to be eliminated by simply deleting the moments that you have had together. Movies this brilliantly designed and executed are rarities. Movie reviews this deliberately confusing should not always be published. "Eternal Sunshine of the Spotless Mind" is a real treasure.

I think the show might have actually been called "Siskel and Ebert At the Movies." Great show. Four Stars.