By By Bridget Byrne - For The Associated Press

Los Angeles — "Reba Hart is a lot like Reba McEntire," says the country music star about the sitcom character she plays on the WB's "Reba."

"We're very fiery. We are both very loyal to our family. And we are very protective mothers," McEntire explains. "And we get ourselves in jams every once in a while by things we say or do."

The singer-turned-actress was talking in her dressing room on the 20th Century Fox lot where "Reba" is filmed. Now in its third season, the series (7 p.m. Fridays) is a solid hit, particularly with teenage and adult women.

The Grammy-winning performer has sold more than 48 million records in her 25-year career. She's currently on a 33-stop tour, featuring songs from her latest album, "Room to Breathe." She also sings the "Reba" theme song, "I'm a Survivor."

But she was a neophyte in the world of weekly sitcoms when she auditioned for her current series, which was initially titled "Sally."

"The reason for her success in every part of her life is that she never hesitates to ask for help," says Christopher Rich, who plays Reba's ex, dentist Brock Hart, now married to his hygienist, Barbra Jean (Melissa Peterman).

McEntire, 48, describes herself as "an easygoing person," usually soft-spoken, but no pushover when it comes to taking care of business.

"I stand up for my rights, and I like to say it with a smile, but if it's not perceived as something I really want, they are not taking me seriously, then I have to give a little bit more volume," she says.

Recently there were rumors McEntire might hold out for more money on the series. Asked to comment, she responds, "Everyone wants a reward for your hard work," but then adds she'll do the show "as long as the audience is willing to watch it." 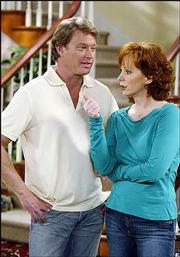 Country superstar Reba McEntire, right, and actor Christopher Rich appear on the set of The WB's "Reba," at the 20th Century Fox studios in Los Angeles. Now in its third season, the show is a solid hit.

She loves portraying "a roller coaster of emotions" on "a great family show about real family situations."

Rich, 50, says the series about the aftermath of divorce -- "a very common American story" -- resonates with audiences because "Everybody's had some sort of heartbreak, and you have to continue on. This is a show about continuing on."