It's an atmospheric action game that provides genuine scares and a solid, branching storyline.

Midway branches out into the horror/action genre, signing unproven developer Surreal Software to create an intense and frightening experience. Sounds like a formula for the ordinary, right? Luckily, what comes of this team generates the scares and fun it was designed for. 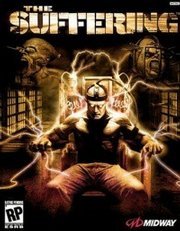 You are Torque, a man sentenced to death for apparently murdering his own wife and kids. Torque is thrown in with the other filthy inmates to ponder his coming fate. Before too much time passes in his cell, mysterious creatures take over the prison, killing all inmates but him. It's from here Torque sets out on his attempt to escape from the haunted prison.

The Suffering is played from either a third or first person perspective. It's your choice. The third person perspective seems native to the game. You can see your surroundings better, and the controls seem more free. When switching to the first person mode, your aiming can get more accurate, but controlling it may seem unfortunately stiff. For the most part, you will be using the third person view.

Regardless, right out of the box this game is scary. As you attempt to leave your cell, a flexible creature called "Slayer" with metal stakes for arms and legs dispatches of a guard in a most unsettling way. (Stan Winston Studios, popular for the Aliens movies, created the characters you see in the game.) Armed only with a knife, you swing at this Voldo-looking creature with much success. Knife wielding proves to be a collision-detection nightmare for most developers, but The Suffering's blade battles come off well.

The only way to get a gun at the start is to kill one of the guards for it. This is where the storyline starts to branch from your chosen actions. You get to create what type of person you are. Moral or immoral? Killer or savior? So when this guard asks you to stick with him for safety you have a choice. You also have two voices in your head suggesting actions. A demonic voice will tell you to kill him while the woman's voice will tell you to calm down and go with him. These types of situations are spread throughout the game and your choices determine the ending. There are multiple. On your way, you will flashback to pieces of events that "justified" your incarceration to further the storyline.

Once the first couple levels pass, the guns start pouring in with your standard fare of grenades, shotguns and pistols. Some guns can be wielded two at a time. The most fun I had was wasting several types of baddies with two tommy guns. Good times. What's almost as satisfying is enabling "rage mode" where Torque becomes a big nasty beast for a limited time, being able to rip through several enemies with brute force.

What's amazing to me is that I never got bored of the prison, where most of the action takes place. I am a huge fan of outdoor, varied and open environments (See: Halo). I tend to get claustrophobic or bored rather quickly with narrow, uninspired indoor locales a la Doom. So that says volumes of the prison and level design. It really is superb considering its limited scope.

There are also puzzle elements. Well, they're more like logic problems rather than mystic Zelda-type puzzles. You actually have to move or manipulate objects in a room to make other objects function like they would in real life. It's a fresh change of pace.

The creature design is top-notch. Some meanies form out of dirt or even water. Each character is designed to make you fear every-day puddles, corners and dirt. The AI is no slouch either. There are various routines each enemy goes through depending on the context of each situation. It's very refined. These design elements make The Suffering shine. It creates a high jump-factor. For someone who doesn't get scared easily, I must admit I jumped at several instances.

The graphics are hit and miss. There are some muddy, repeated textures juxtaposed with great reactions and architecture. It's difficult to span the color palette when creating a dark and musty mood, though. It does create for some confusion knowing where to go sometimes, but it's not that bad. So what is here is admirable, if not awesome.

The sound is wonderful. The separation in Dolby 5.1 (only for the Xbox version) is beyond compare. The clanging of chains and metal on the floor pings with correct position and precision. You will drown in the atmosphere and mood. The voice acting is pretty paltry, however. There is no apparent chemistry between the actors. I'd be pretty surprised if they were in the same recording session. Also, the "M" rating is with purpose. The language is excessive and is not suited for younger players.

The Suffering is a great game. With better texture work, refined controls and better actors, this could've been easily an "A" package. Still, this game is solid and overachieves on many levels and deserves a hard look by all.