Does MVP Baseball take the pennant this year over Sega's offering?

Outside of pitching mechanics, MVP Baseball 2003 basically paled in comparison to Sega's World Series Baseball 2K3. But this year, it seems that MVP 2004 has overhauled many weaknesses of last year's rendition to bring us the best game of baseball ever to come out of EA. 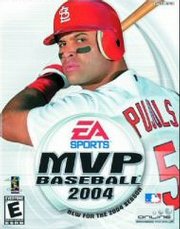 Just cycle through the menu and you will discover the deep amount of modes available outside of exhibition and season modes. Franchise, homerun, pitching contests and other modes are just the beginning. Franchises can span a whopping 120 years, and you can choose from past All-Stars, all AA and AAA teams while micro managing trades and development along the way.

In the new Manager mode, you can call in the pitches and hits, and watch your team play with what you call. If you don't like the way it's going by the fourth inning, you can jump in and play a few innings, then go right back to playing the manager, calling the shots from the dugout.

Situation control is my favorite mode. It lets you set up the game, teams, inning, outs, etc. to customize a template for a heroic comeback. This is a short-lived mode, no doubt, but the hardball hard-core may find themselves spending so much time recreating past real-life situations they wish went differently.

Also new is the "Pure Swing System." Not only do you have to be incredibly accurate with your timing, but you have control over what type of hit you make. Pressing up on the thumbstick will give you a pop-up, down for a grounder, then with left and right you set up to pull the ball or send it the opposite way. I still think World Series Baseball 2K3's batting mechanics offer much more pinpointed control, but the Pure Swing System is much improved over last year's EA effort.

Fielding is also better this year. You can use the right stick to dive, slide or jump for a ball, adding an extra ounce of realism and control. If you choose to have unassisted fielding, you will give up many triples in a few games before you totally come to grips with how to cutoff and base throw. When throwing to a base, you can hold the button down a little longer to get a faster throw. But with that comes more inaccuracy, and you may give up more bases if you throw it in the stands.

Pitching power and accuracy of pitch are handled with a meter. With better pitchers, it's easier to make the reticule stop on the accuracy bullseye, as usual. When playing against a friend, the initial location fades away, so he doesn't have a head start on where you may pitch the ball. This creates quite a learning curve for those not used to the system, but for the most part, it's really rewarding.

Each version suffers from some framerate hiccups, none more than the PS2. It's only slightly distracting. However, the animations and character models, although good, don't quite have the polish we saw in last years offering from Sega. There are over 100 batting stances and swing styles included. Obviously it stands to reason it's included for the most popular players (although Bonds's likeness isn't included because of petty legal issues). The stadium models are a vast improvement over last year and are much more accurate. And where are my exciting homerun celebrations? Come on, now. The crowd looks pretty blah which is commonplace in baseball games. Some textures really need work as well on the lining of the fields and walls. But certainly the game is functional, just not as smooth or polished as it's capable of being.

Duane Kuiper and Mike Krukow got the nod for the commentary again and really span the spectrum with the detailed calls. The context detection is much better, leaving only a few situations analyzed incorrectly. The cracks of the bats and in-field noise is great. The crowd has a variety of chants that are fairly accurate to each city, improving the feel of the experience.

MVP Baseball is a great game. However, it doesn't dethrone World Series Baseball 2K3 in my book. It does bring a lot to the table, however. The amount of extra fun modes are satisfying and make you want to stay longer. A fine and very improved effort from EA. It warrants a good look.