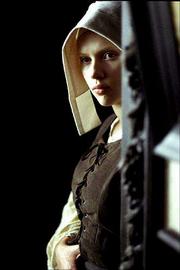 Scarlett Johansson stars as a servant in the house of a Dutch artist in "Girl With a Pearl Earring."

Every year or so a movie gets released that is cherished more for its look than its actual content.

"Girl With a Pearl Earring" falls into this category, joining such films as "Days of Heaven," "Barry Lyndon" or "Blade Runner" as a lofty achievement in visual mastery. (It earned Oscar nominations in cinematography, art direction and costume design at this year's awards but got shut out by the "Return of the King" steamroller.)

Director Peter Webber and cinematographer Eduardo Serra compose each shot as if it were a painting. They reveal an uncanny knack for reproducing the lighting, colors and textures used by 17th-century Dutch artists.

It's no coincidence that this method is adopted because the simple tale is solely inspired by Johannes Vermeer's 1665 portrait of the same title.

In "Girl," Scarlett Johansson ("Lost in Translation") plays Griet, a teenager in Holland forced to financially support her household after her father is blinded. Griet goes to work for Vermeer (Colin Firth), a moody recluse who spends most of his time sequestered in his studio. His perpetually pregnant wife (Essie Davis) and their privileged children are condescending and cruel to Griet, whereas Vermeer's leering art patron (Tom Wilkinson) takes an unhealthy interest in her.

When Vermeer is commissioned by his sponsor to create a painting of Griet, it causes tension within the household and forces both the servant and her employer to reexamine their relationship.

Little historical record exists about Vermeer -- and none concerning his famous model -- so the tale is based on pure conjecture. Although adapted from the Tracy Chevalier novel, the story serves more as an excuse for showcasing the filmmakers' abilities to transpose the appearance of Vermeer's world onto celluloid.

This obsession with detail doesn't just apply to the cinematic aspects of the production but to the mundane duties of the characters themselves. Few movies actually take time to disclose how a painter goes about his craft, from mixing pigments to pondering the layers of hidden color within clouds.

Yet the film also lingers on the domestic chores that Griet must contend with -- washing clothes, tending to the kitchen, etc. If these moments weren't delivered with such an aesthetic flair, they would probably be too tedious for the big screen.

In Hollywood terms, very little happens in "Girl With a Pearl Earring." There are domestic confrontations and passions on display, but ultimately the film is more about the world these characters inhabit than the individuals themselves.

Girl with a Pearl Earring ***

Pure historical conjecture provides the cinematic framework for what led artist Johannes Vermeer to create his legendary 1665 portrait of the same title. But the rather wispy story line takes a back seat to the stunning visual compositions of each shot. Star Scarlett Johansson only accentuates the gorgeous textures.

This may be why the usually reliable Firth ("Bridget Jones's Diary") comes across as such a dud. His attempt at depicting a tortured artist is more boorish than brooding. Fortunately, his co-star takes up the slack.

Johansson usually projects such a contemporary aura that her presence could prove anachronistic in a period piece (a la Kate Hudson in "The Four Feathers"). But her performance here is thoroughly convincing, yet again proving that the actress is one of the true standouts among the younger crop of Hollywood stars.

And it's just uncanny how much Johansson looks like the subject of the prestigious portrait. Her moon-shaped face, doe eyes, lush lips and porcelain complexion results in a resemblance that couldn't be achieved through makeup or lighting tricks.

It's yet another aspect of the film's compositional elements that approaches perfection. On its own terms, "Girl With a Pearl Earring" makes a visual impact that's comparable to Vermeer's masterpiece.