The Capsules, "Someone for Everyone" 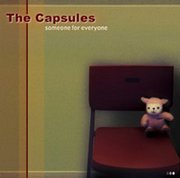 Husband and wife duo Julie and Jason Shields have been crafting atmospheric shoegazer rock for nearly a decade since their inception as Shallow, a thickly layered alternative quartet that shared the second stage on Lollapalooza and made an appearance on MTV's "120 Minutes."

"Someone for Everyone" is the Shields' second effort as The Capsules, and also their second with drummer Kevin Trevino. The trio weaves hypnotic bass riffs around simple, plucky guitar lines and loopy sound effects, creating a sound larger than the sum of its parts.

The album picks up where the band's 2002 debut, "Reverser," left off. Julie's ethereal voice is once again the centerpiece, which can make or break the record depending on one's predilection towards sweet female voices. This time around, however, she layers on harmonies and multiple overdubs, a trick that fits nicely into the wall of sound crafted by bassist/producer Jason.

One thing that hasn't changed from the last record is the pace: If anything, it's slower. Like Low, The Capsules dwell in a state of constant dawdling. Depending on one's tastes, this can either be transcendent or monotonous.

"Starting Tomorrow" brings a fresh approach to The Capsules' sound with a driving, marching-band snare drum and crushing bass groove. "Visual Searching Pattern" is a charmer of an instrumental, with samples from late-night infomercials (Don Lapre anyone?) and a circus-like melody. "Turn to Stars" showcases Jason's ability to fashion wide-open, yet dense, expanses of sound a la My Bloody Valentine.

The closing track, "It Hangs Over Me," offers a taste of the band rocking out harder than usual, albeit still at a snail's pace. It's almost like the group is teasing listeners by making us beg for just one cathartic moment of full-on rock.

But full-on rock wouldn't be The Capsules. And for the people who will enjoy putting on a pair of headphones and getting lost in the waves of discordant sound on "Someone for Everyone," it isn't the point anyway.