At play in the fields of the loud

Lawrence's MartinLogan crafts speakers for the world's most selective ears

A pair of Ascent i speaker cabinets get their first layer of primer in the paint booth from MartinLogan employee Rick Carr.

Fabio owns a pair. Chandler and Joey had a pair in their apartment during the first few seasons of "Friends."

And according to various employees of MartinLogan speakers, Garth Brooks, Ice-T, Jason Biggs, Madonna and Mariah Carey also own a pair.

"We don't have a complete celebrity list because celebrities don't usually register their products," said Devin Zell, marketing manager for the Lawrence-based speaker company. "We usually hear about them from the dealers, or some people see them on MTV's 'Cribs.'"

With speaker systems that range in price from $1,500 to $80,000, MartinLogan caters not just to celebrities, but audio enthusiasts across the world. The company designs and builds electrostatic (ESL) speakers, a unique technology that a number of companies have tried to develop but only MartinLogan has perfected. With 65 employees and 25 years in Lawrence, it's one of the town's most successful businesses, yet also one of its least visible.

One of the reasons for the company's under-the-radar local profile may be that the closest place to actually buy a pair of MartinLogan speakers is in Overland Park. Though the speakers are designed and built at the company's headquarters at 2101 Delaware St., the factory is largely closed to the public (with the exception of pre-arranged tours).

The company prefers to keep a low profile to maintain its competitive advantage, according to David Allen, director of product development.

"There's a fairly high level of security on information that flows out of here," Allen said. "A large percentage of the market pays attention to what we're doing, because we're essentially either breaking new ground or refining categories that redefine the market.

"We're not chasing anybody; everybody's chasing us."

Ride the lightning
MartinLogan is the brainchild of Gayle Martin Sanders and Ron Logan Sutherland, who tested their first ESL prototype in 1978. At the time, the speaker was simply a thin membrane suspended between two flat, perforated plates that Sanders compared to a "big, ugly screen door."

"I remember putting the tone arm down and it was Joni Mitchell ... from that very first moment that we played the music I could see the promise of a dream," Sanders said. "Of course, then I said those famous last words: 'Let's turn it up.' I cranked that volume level up and ... "Boom!" a big old lightning bolt went off and blew a hole in the diaphragm."

So began a frustrating journey to develop a safe and reliable consumer ESL speaker. Sanders spent the next couple of years researching new aerospace materials -- adhesives, conductive coatings and insulations -- and tinkering with the design. When he finally developed a reliable (or so he thought) model, lightning struck again.

"We got about 200 pairs of speakers out there and they all broke," Sanders recalled. "I was up all night every night trying to solve this problem, and I couldn't solve it ... I remember leaning up against a big pillar, very close to tears ... if not crying. I'm looking at this transducer and I'm thinking, 'Tomorrow, tomorrow I have to shut the doors on this company.'"

Foiling the cold hand of fate, Sanders solved the problem that night and began work on what would become the world's first non-self-destructing ESL speaker.

"Immediately we just started blasting out replacements all over the country," Sanders said. "MartinLogan from that day on became known as a company that solves their problems, as opposed to a company with products that break."

The company set to work developing a line of consumer models. Today, MartinLogan sells more than a dozen models for music and home theater, all designed, manufactured and shipped from its Lawrence headquarters. Its trademark curvilinear design - patented by Sanders in the company's early years - allows the sound to spread out across a larger field than a flat ESL speaker would.

Grills for the MartinLogan Theater i speakers are passed through a powder coating machine by employee Jason Tovar at the Lawrence production facility.

"It's a lot of pressure to always make sure everything that gets out of here we stand behind 100 percent," he said. "But it's pretty satisfying when we're successful at it."

Making a Statement
MartinLogan's ultimate creation is a $79,900 four-tower, one-ton ogre of a system known as the "Statement evolution 2" (the next most expensive system lists at $10,995). The system is so enormous and intricate (the subwoofer alone contains 16 12" speakers) that the company can only make about 10 a year -- just enough to accommodate demand.

"(The Statement is) not about making money; it's about why Ferrari has a Formula 1 racing vehicle," Sanders said. "If we believe that we've got the world's best technology to reproduce sound, then we need to put our money where our mouth is."

Gilbert Yeung is a member of the elite group of people who actually own a Statement (Fabio is a member too). The 34-year-old entrepreneur and owner of Blue Circle Audio in Ontario bought the Statement e2 system two years ago.

Yeung already owned 15 pairs of MartinLogan speakers, but he said the Statement was essential to complete his dream setup.

"You have to put it in perspective: after you spend $80,000 on the speaker, how much more money are you going to spend on the room and the electronics?" Yeung said. "That can add up to maybe $350,000 easily."

"I'm driving an eight-and-a-half year-old station wagon that leaks oil and coolant; I live in a house that is 120 years old ... my computer is seven years old and I don't have a TV," he said. "I just set my priority to audio. And I'm single -- that helps."

Scott Gribble, who does the final assembly of the Statement systems, said most of the people who purchase the Statement spend an equal amount of time and money on the room it goes in.

"The idea is you want to be able to recreate a concert experience -- whether we're talking about symphonies or Coldplay -- in your living room," Gribble said. "It takes this to get to that, to where it's effortless -- the speakers disappear and all you hear is music." 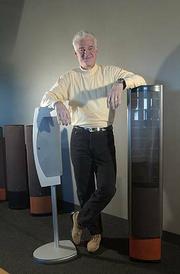 MartinLogan Speaker Company owner Gayle Sanders with two of his companies speakers the fresco, left, and the Clarity, right.

"The sanding operation is probably 80 percent of the labor ... making sure that every little ding and nick and scratch is sanded out of them," he said. "By the time they get out of here, it's hard to tell that it's wood."

The company hires both skilled and unskilled workers but offers its employees a chance to work up through the company and switch departments as they gain skills.

Dan Pem worked his way up to panel building, where he painstakingly matches and curves the panels that sandwich the ESL speakers' clear membrane.

"It's more like an art form than it is a production job," Pem said. "It's not just taking a prefab thing and drilling a few screws in and then you're done. Every time I (build) a panel there's opportunities to screw up."

When the speakers are complete, they get shipped out to more than 300 retailers across the country, including Audioport in Overland Park at 97th and Metcalf.

Audioport owner Richard Milam said buyers are often attracted to MartinLogan speakers as much for the unusual design as the superior sound quality.

"The first reaction sometimes is, 'Is that a speaker?'" Milam said. "We find that an effective way to demo them is to actually wave your hand behind them so (the buyer) can see through the panel, and then explain to them that most of the sound actually comes from that panel."

Sound evolution
With the company's infrastructure in place, Sanders must now focus on adapting to the challenges presented by the digital music revolution and the changing tastes of consumers.

Paul Schmidt does electonics testing on crossovers for Martin Logan Ascent i speakers at the Lawrence production facility.

"There's a new quality buyer out there, but they're interested in a lot more than just sound," Sanders said. "Our speaker products have to change accordingly: they have to go on the wall ... they have to be smaller; they have to be even more aesthetic."

Staying ahead of the competition means keeping an eye on the future, which Sanders feels confident about thanks to an ever-evolving team of industrial designers and engineers. In the last three years, MartinLogan has expanded beyond ESL technology to add lines of subwoofers and advanced thin film (ATF) speakers.

"I would be willing to wager money that in 10 years we will be building speaker products that will be intelligent ... it will know what's going on in the room and be able to interact with it and adjust itself to achieve a perfect sound," he predicted.

When the stresses of work become too much, Sanders can always retire to his home listening room -- equipped, of course, with the Statement "evolution 2."

"I love classical; I love rock," he said. "If I'm sitting down and listening I want it loud."