Q+A with All Night Radio 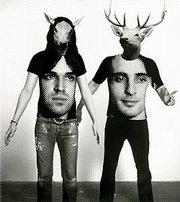 When lawrence.com was but a sprog, we had the rare opportunity to travel briefly but eventfully with the Merry Pranksters themselves. When they weren't hiding acid in our Enfamil they were regaling us with stories of futures past; of strange events that had yet to happen years and years ago. These glorious days are understandably etched indelibly onto our collective memory. Sadly, we remember none of it. One of the things we don't remember is when Ken Kesey himself (while viciously flogging Wavy Gravy as it so happens) told us of All Night Radio -- the former side project and current nonside project of Dave Scher and Jimi Hey, formerly of Beachwood Sparks, currently of Los Angaleez, CA. Along with slap-bassist Tim Koh and supercomputer Rainbow Jeremy, they are currently spreading their mischief across the hulking expanse of the great American landscape, which is why their cellphone didn't work, which is why lawrence.com had to call back twice before being given another number, one associated with a better phone. But that's not why lawrence.com forgot to press 'record' before that third phone call. The third call was when we gave them our recipe for microwaved Ding Dongs and gave them grief about how stoned they were, and the fourth call was our attempt at salvaging an interview from all of that. Anyway, there may be an interview in here somewhere.

All Night Radio / The Sound You Say / The Trelese

Hello? Is this Dave?

Yeah, this is Dave.

Hi Dave, this is lawrence.com. It sounds like you're inside a waterfall. Is that the case? 'Cause I'm not hearing you very well.

You wanna try calling back again?

I'll call you right back.

Hi. How do you pronounce your last name? Sure? Cher?

Y'know, if you went with the one name approach, you can't go wrong with Share.

Yeah, Cher sounds better. [garbled] I'm having trouble hearing you. Breaking up a little bit. Can you try another number?

lcom: Hello, is this the van?

Hi, this is lawrence.com. Um, I was thinkin' I could do a shorter interview, and this time hit 'record'?

Uh huh. Oh, do another one?

I apologize, but apparently I'm way higher than you guys.

Apparently I've got issues with my memory. Short term.

Would you guys mind doing another one?

That's awesome. You guys are my new favorite band.

Who am I talking to?

[not really sure it's Jimi] Okay, Jimi. Thanks again, man. Let's just get this over with so you guys can get on with your lives.

Tell me about your new record. All about "Spirit Stereo Frequency."

I think Dave wants to take this one.

Hello? Is this Dave?

Yeah. You want to do a whole 'nother interview?

Well, all the questions about how high you guys are?

You didn't record all that? Whoa.

Sometimes it's hard to capture that kind of spontaneity.

So let's not even bother with spontaneity. Let's just try and make it as mundane as possible.

Well, I would like to -- we don't have as much time, actually, because now we're getting near the club. We're working on mixing. We mix music while we approach the next town, depending on how we'd like it to go.

A lot of the sound that you're familiar with on the record will be cooked, hatched if you will, and so, let's see -- Maybe just fire off a couple more, but we don't have quite as much free time at the moment.

Okay, what's the most important thing we need to know about All Night Radio?

That it is a sound source that will refresh and satisfy -- guaranteed.

Okay. What do you think of the "psychedelic" label?

Well, it's a word -- we're not afraid of it. It's understandable that journalists have to do something to articulate and explain.

Okay. If you had to choose a classification for yourselves, would you choose differently?

No. Well, we were self-classified as "omnichronistic" music, and that, with psychedelia, we think has to do with sometimes -- anything that falls under there, it could be a wide array of styles you're going up against, that in general you're talking about something that might be extrasensory. You could call it supernatural music as well.

Imagination and fun. But mainly imagination, we feel, is like the secret kingdom on Earth that is right before everybody's eyes. You hear about it through such luminaries as Lennon or Disney.

Do you consider "Spirit Stereo Frequency" to be a concept record?

Yeah. It's not militantly so. It is sort of nesting in such an environment.

And what would that concept be?

The idea of an all night radio that will not quit, a collision of displaced sound styles from the present, past, and future.

Alright. All things to all people, all the time.

Well, you're kinda going for it there. It would depend on you.

So it's a very personal experience.

Yeah, it's a -- and it is. Even Kansas sounds different to every person who listens to it.

The state or the band?

What do you expect to find when you arrive at the city limits of Lawrence?

The hurricane bar, Jackpot, twisters, and hopefully a mob with torches.

Guaranteed. Has anyone ever lost an entire interview with you before?

I don't think so.

[laughs] I don't. I think this is the first.

'Cause Charlie Rose does it all the time.

But you're used to that stuff, being Californians.

Yeah, we had quite a season. ... When the Santa Ana winds come in the fall is a deadly time to be a dried out piece of straw on a hillside.

What can you expect when you've drawn such a lot in life.

Yeah, you drew the short straw.

Or you are the short straw.

Well, I've got nothing else.

Yeah, just try and just assemble everything that we said: "Splendid. We're high as elves. Six-string bass. Dave got exfoliated, a few layers, by a laser at the gas station."

What?! I didn't realize it was a gas station laser. Those are the worst kind.

They have high standards in Tucson.

Okay. Well, I'll try to make sense of any of this.

Remember that Tim Koh is bringing the funk to Lawrence.

And just one more word from Rainbow Jeremy:

What did he say?

Dave Scher or Jimi Hey or Tim Koh: That was Rainbow Jeremy.

He has a lovely voice. Will he simply be playing loops and such, or will he be allowed to shine a little more?

He might, but you probably won't see him. He's usually hidden away behind a curtain or something doin' all that.

We love the hidden mastermind behind the curtain, you know.

That's what we'd like to see the most -- the wizard.

He lives in Lawrence. He used to live in Topeka, but he retired here because of the... funnel cakes.

(Clearly, like Rainbow Jeremy, some things were never meant to see the light of day.)