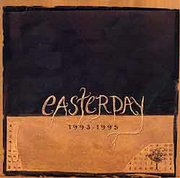 Editor's note: In the interest of full disclosure, it should be mentioned that Easterday bass player Jon Niccum writes for the Lawrence Journal-World and regularly contributes to lawrence.com.

Anyone who plays in a band knows there's a lag between recording an album and actually putting it out. It's not uncommon to sit on a finished project for one year, two years ... 10 years.

That's right, Easterday's debut album is now available, nearly a decade after the band broke up. The previously unreleased sessions -- recorded at Red House Studios -- have been mastered by Ed Rose (also the original engineer) and sequenced into a 9-song CD.

While the band formed and earned a strong local following between 1993-1995, Easterday's style could just as easily be placed in the late 80's alongside groups like Trip Shakespeare. The band's boisterous male/female vocals recall that group to a tee, as does its funky rhythm section.

Musically "1993-1995" sounds a bit dated (duh), but in many ways it's completely refreshing. Easterday's approach is devoid of pretense -- an adventurous style that harkens back to an era when "alternative" music was still getting its feet wet. Though the results may sound awkward by today's standards, that's the charm of listening to this disc -- it's removed from the conventions of "alternative" music circa 2004.

Lead singer Scott Easterday's voice is by turns fragile and resolute, conveying thick shades of emotion. Drummer Mark Acuff (also formerly of The Pedaljets) puts in some powerful performances, augmented sonically by Ed Rose's studio voodoo. Dynamics play a key role in the band's sound, as a number of songs begin with whispered guitar and vocals only to erupt into all-out jams two minutes in.

The band sounds loose and uninhibited on songs like "Smothered," seamlessly changing tempos and grooves and allowing the songs space to ebb and flow. "Autumn" -- one of many duets between Scott Easterday and second guitarist Elaine McMilian -- features some of the record's most memorable hooks and striking dynamics. "Cartoons and Heart Attacks" showcases a tom-tom heavy drum groove reminiscent of another exciting band from Easterday's era: The Poster Children.

Easterday's reunion will more than likely be a temporary rekindling of the flame, but for the people who experienced the band in their heyday, it should be a welcome return to the stage. "1993-1995" offers a solid introduction to the band, even if it comes a decade too late.