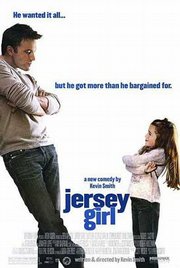 Kevin Smith is the writer/director behind controversial films like "Dogma" and "Chasing Amy." He's known for rapid-fire, hard-R dialogue in movies like "Clerks," "Mallrats," and "Jay and Silent Bob Strike Back." He has amassed a loyal fanbase and cult following (me included), who forgive him for his lack of lofty cinematic goals as a director and enjoy his unique, often hilarious style.

I knew going into "Jersey Girl" that Smith was trying something different. The affable jokester has become a father, and he wanted to write a film that reflected that attitude. But it takes more than a couple of dirty one-liners to retain your edge in light, predictable fare.

Veteran Smith actor Ben Affleck plays Ollie Trinke, a single father who is always the last one to know when he's acting like a jerk-off. I hate movies where the main character's story is so forced that none of his motivations seem real. Every other person he interacts with seems to know better than him, but in this kind of obvious fodder, Trinke must learn these life lessons himself. While I understand that the unexpected death of a wife and the loss of a job would make anyone act a bit crazy, I didn't believe any of it for a minute in "Jersey Girl."

And I certainly didn't need three scenes of Affleck sulking around in his 501s, pondering his mistakes while some melancholy adult contemporary ballad plays in the background! I expect -- no demand -- this sort of cliched lameness from "You've Got Mail" and "Father of the Bride." From the man who perfected clever dirty talk, I thought I'd be in for a more original ride.

Even in his worst movies, overrated indie filmmaker Kevin Smith is usually a pretty sharp writer. Not this time. Smith jettisons whatever edge he once had in favor of a safe, frequently maudlin tale about a single father (Ben Affleck) who moves back to Jersey to reconnect with his family. It's not unwatchable, just uninteresting.

I could tell from the first 30 minutes exactly where the script was heading, and, frankly, it made me sad. I love "Say Anything" and "About A Boy." I think it is very possible to make a witty romantic or family comedy. I know Smith can whip up some of the funniest, whip-smart dialogue around, but in his eagerness to try something new, he has abandoned too many of his strengths as a filmmaker.

On the other hand, "Jersey Girl" is way more watchable than your average Keanu Reeves-Sandra Bullock vehicle. And maybe that's how Smith wanted to measure the success of "Jersey Girl."

Kevin Smith's production company, View Askew, put their logo at the end of the credits. The voice of Jason Mewes, who plays Jay in all other of his films, came on and said "Snooch to the nooch!" The four middle-aged ladies who were laughing throughout and enjoyed the film way more than me asked out loud, "Ooh, what was that?"

"I've never heard of that before!"

That's when I fully realized that "Jersey Girl" just wasn't made with me in mind.