Chesty Lions prepare for battle of the bands 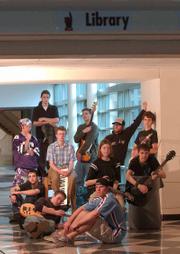 Julia Lee is a little nervous about her performance next week in the Lawrence High School Battle of the Bands.

The 18-year-old singer/songwriter will make her debut at the battle, which takes place Saturday in the school's cafeteria. The annual event showcases talent from LHS, cramming nine bands into seven hours and allowing audience members to pick a winner by secret ballot.

According to Jim Piller, who won the competition two years ago with his band Clockwork, Lee's apprehension is probably warranted.

"When people go to the LHS battle of the bands they want blood," Piller said. "When we won, we got several shows out of it and a lot of recognition ... We also got a lot of people going to our Web site and leaving very incendiary messages in our guestbook."

Lawrence High Battle of the Bands

The 17-year-old brothers, both juniors at LHS, got into rap in seventh grade when they began recording songs over built-in beats on a friend's stereo system. A couple years later, they discovered their favorite performer: Kansas City rapper Tech N9ne.

"Ever since we heard him we were just like, 'Holy crap, rap is awesome,'" J Boogie said. "But you gotta take everything in -- Beatles, Elvis, Michael Jackson, Puff Daddy,
whatever you can take."

The duo downloads beats from independent producers on mp3.com and performs live with two microphones and a CD player.

"The programs we have suck for making beats, and we don't have enough money to buy them," J Boogie said. "Except (mp3.com's) been down, so we've been kind of screwed for the last month and a half."

Though the duo's expletive-laden raps could ruffle a few feathers, J Boogie said the high school has been accommodating and hasn't tried to censor them.

"We try to keep it gangster," J Boogie said. "If our ex-girlfriend makes us mad, we'll write about it in a semi-violent way ... People at school are like, 'Dude, you guys are crazy.'"

The brothers try to get out and see as many local hip-hop shows as they can, but they often miss the ones that are 18-and-over or fall on school nights. In the case of a recent all-ages Mac Lethal performance, however, the only thing stopping them from going was their parents.

"My report card came in the mail the same day," Playskool explained. "I heard it was sick, though."

Love of the game
Though the winners of the battle will walk away with bragging rights and a small cash prize (about $100 winner, $50 runner-up), most of the performers are simply happy to have an opportunity to play.

Tyler Bachert, keyboardist for Conceptual Blue and Southern Mothers, said he didn't expect either of his bands to win.

Julia Lee (left) is Sicko, who will be performing with her no-longer-in-school brother-in-law Jasper Teel

"There's two bands full of football players -- you know, like, the big jocks," Bachert said. "Audience-wise it's almost impossible to compete with 'cause they drag in their millions of friends."

"It's kind of like a battle of who can get the most people to come to the show," Pelsma said. "Last year we played during the KU (Elite Eight) game so nobody came to see us at all."

Pelsma is hoping basketball won't be factor this year, as preparations are already in order to broadcast the game on a big screen behind the bands should KU survive into the Final Four. On the other hand, the projection would add another layer of mystique to Conceptual Blue's multi-media-driven performance, which features multiple video projections and audio samples.

"We don't really fit in with what most typical high school rock bands are right now," Pelsma said. "I think the thing now is kind of that Good Charlotte meets The Used sound ... We try to do something new and creative." 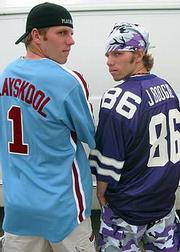 Finding a home
On of the biggest challenges for a high school band can be simply finding a place to practice. With warmer weather budding, however, there are a few more options.

"We just haul everything out of my basement and put it all in my driveway," said Nate Clayton, bass player for The Rivals. "We have quite a few people walking by that stop and listen."

Besides the battle, other popular venues for local high school bands include open mic nights at The Bottleneck, rented spaces like Knights of Columbus halls and the ever-popular basement shows.

"It's kind of difficult to get some gigs because people really sometimes don't take children seriously," said Aric Houk, an organizer of the battle and singer/guitarist for One Last Ride.

"I play pretty crazy hard music and I still wear Abercrombie," said Houk, who names Disturbed and Staind as two of his biggest musical influences. "Same with the other guys in my band -- they're all pretty GQ." 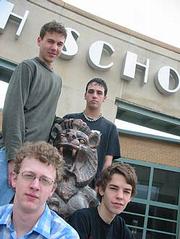 Houk said people who saw him at school probably wouldn't even know he played in a band. "Most of the people that we play with are really talented, and I wish people would come listen to them," he said.

First-year LHS principal Steve Nilhas said he was impressed by the student's efforts to organize the battle.

"Some of these kids have a pretty good historical knowledge of rock music and pop music," he said. "Some of them do actually like the '70s groups, like Lynyrd Skynyrd and groups like that. I even had some kids the other day that borrowed my Johnny Cash double album as they were barbecuing in front of the school."