Customers fuel up at tiny restaurant

You rarely find authentic Mexican food in a gas station.

But that's the case with Tortas Jalisco, a tiny Lawrence restaurant serving Mexican dishes in the corner of the Phillips 66 gas station at 3300 W. Sixth St. 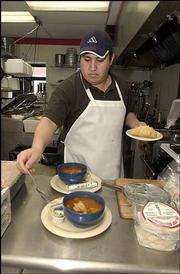 "I was kind of surprised when I came (to work) here -- it's excellent," said Jameel Adnan, 22, a student at Johnson County Community College who lives in Lawrence and works as a clerk at the filling station.

"I've tried a couple of the other Mexican restaurants in town, and these guys can compete with them, even though they're in a gas station. Customers usually ask me if they should try it (the food). I tell them, 'Why not?'"

Despite its unusual location, Tortas Jalisco -- owned by Angel Alvarez and his wife, Laura Romero, -- has attracted quite a following among Lawrence residents.

Like Antonio and Laura Moreno. They started coming to the 20-seat restaurant soon after it opened in September 2003.

"The first time we saw an advertisement (for Tortas Jalisco), we were looking for a big restaurant, and we couldn't find it. So we called, and they said it's inside a gas station," Laura Moreno said.

"It's very good -- real Mexican food in Lawrence. The taste, the seasoning and the ingredients ... mmm, yes, very good."

The couple is from Ciudad Juarez, a Mexican city located right across the border from El Paso, Texas. They have lived in Lawrence for two years, while Antonio Moreno earns his doctorate in Mexican literature from Kansas University.

"Angel is a typical Mexican -- he's friendly. 'Do you like it?' 'Is it good?' 'Do you want more?' Laura (Romero) is more shy, but she makes the best salsa in Lawrence," Antonio Moreno said.

Customer by customer, Tortas Jalisco is proving that a gas station is as good a home as any for an authentic taste of Mexico.

What's on the menu

First, the name: Why do they call it Tortas Jalisco?

And the word "Jalisco" is the name of the Mexican state where Alvarez is from. Romero, meanwhile, is from Puebla, a city located in the Puebla state of Mexico. They have lived in Lawrence for four years.

Huge tortas make up the heart of the restaurant's menu.

The Torta De Tinga, for example, has chicken marinated in a special chipotle sauce with pepper jack cheese, beans, lettuce and tomatoes.

Angel Alvarez, co-owner of Tortas Jalisco, takes an order from a customer at the restaurant, 3300 W. Sixth St. The Mexican restaurant, which is located in a Phillips 66 gas station, was busy during a recent lunch hour.

The Torta Ahogada has pork, beans, cilantro and onions, smothered with a homemade hot sauce.

Two of the most popular Mexican-style sandwiches, according to Alvarez, are the Torta De Milanesa (hand-breaded beefsteak, beans, lettuce, tomatoes and guacamole) and, for vegetarians, the Torta Tres Quesos (three kinds of cheese, guacamole, beans, lettuce and tomatoes).

All of the tortas are served on fresh bread obtained from a Mexican bakery in Olathe.

But the menu offers more than sandwiches. There also are dinner plates such as enchiladas, flautas, hard and soft tacos, a chimichanga and Jalisco Fajitas (a combination of steak, homemade Mexican sausage, jalapeÃ±os, onions and tomatoes served with rice, beans and tortillas).

A highlight of the menu are the Tingas Tostaditas -- three little tostadas heaped with the chipotle-marinated chicken, lettuce and cheese with rice and beans. Bite-sized and meant to be picked up with your fingers, the tostaditas offer a delicious mix of tastes and textures: spicy and mild, soft and crunchy, warm and cooling.

Each sandwich or dish is made to order by Romero in the restaurant's tiny kitchen, which is equipped with a grill, a refrigerator and shelves filled with ingredients and products from Mexico.

Peppers such as, clockwise from top, Guajillo, Chile de Arbol, and Chipotle are used in many of the dishes.

Customers place their order at a counter, and Alvarez or Romero bring the food out to the tables. There is no wait staff.

"It gets very busy at lunch time. People say, 'Why don't you get some help?' I tell them, 'I don't have room.'" Alvarez said.

Feeding the little ones

Which naturally leads one to ask, "Why put a restaurant in a gas station in the first place?"

It turns out the space in the Phillips 66 used to be leased to another Mexican restaurant, Calientes, which mainly offered tacos.

"The cook who was working for Calientes was my friend," said Alvarez, who has 12 years of experience cooking in restaurants in Pasadena, Calif., and Lawrence.

"He said it was a good location. I was looking for some place I could afford. He told me about this place, and I came and talked to the manager, and I leased it."

The quality of the dishes served at Tortas Jalisco, considering the restaurant's unlikely surroundings, often comes as a surprise to first-time customers.

But the location seems to be irrelevant once people dig in. A steady stream of customers seek out the little restaurant.

"Everybody says it's good. When we have new customers, they say, 'Oh, it's great, and we're going to tell our friends,'" Alvarez said.

Originally, Alvarez had planned to serve American food at the restaurant. After all, that's what he had prepared while working for three years as a chef at the Ramada Inn in Lawrence. And before that, he'd worked as a cook at a steak-and-seafood house in Pasadena, Calif.

"I talked to my wife about opening our own place. I was thinking burgers and hot dogs. But my wife and my brother-in-law said, 'Why don't you cook something that you can't get around here?'" he said.

Like menudo, a traditional, hearty Mexican dish made of beef stomach, hominy and spices.

One customer, a Mexican man who was a member of a Lawrence roofing crew, recently came into the restaurant and bought out all the menudo Alvarez had made -- a big potful.

And that's the kind of food Alvarez said he knows best, from helping his mother while growing up in Mexico.

"I always cooked a little at home," he said. "While the mama has six children to take care of and has to wash the clothes in the river, you have to feed the little ones."