The Atari classic gets a rebirth in this fun awakening

I was five years old and it was Christmas Day. I could hardly sleep beyond 5:59 a.m. as I anticipated the gaggle of presents under the tree. Soon I was tearing through gaudy sheets of wrapping paper as my parents drank excessive amounts of caffeine to sober up from their exhausted stupor. To my delight, there was Pitfall for my Atari 2600, previously hidden in paper. Without any verbal gratitude, I tore it from the box, shoved it in the machine, and I was in 2-bit graphics heaven, jumping over ovals of blue whilst carefully swinging on ropes or landing on crocodiles' heads, naturally. 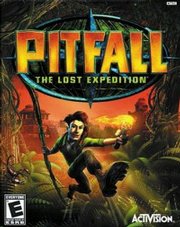 Fast forward to 2004. Activision released Pitfall: The Lost Expedition to reinvent the older old-school title. With updated graphics in a new 3-D world, is it faithful and fun or is it merely an excuse to capitalize on nostalgia?

You are Pitfall Harry, a cheesy, line-dropping geek who strikes out with the ladies. Harry comes across like the son of a bad game show host. One day while flying to an exotic locale, you plane crashes. You survive, of course, and you adventure among the heavy foliage and tropical dangers begin.

Honestly, any remake of any old-school title derives from its previous popularity. Companies are smart to use the name for an extra jump-start to sales. But here with Pitfall, there are noticeable elements right away from the Atari favorite. Swinging on vines, escaping scorpions, jumping on crocodiles' heads and avoiding pits that randomly open and close are all represented here. Of course, add in bats, noxious plants, renegade bush ninjas, spinjas, monkeys and evil penguins, and you've got a tasty palette of baddies.

You have to master swinging on the vines early. Unfortunately, depth perception isn't handled as well as it could and if you jump with a slightly wrong trajectory, you will fall to your death. This becomes guess work at times when jumping from platform to platform when the camera changes positions. Don't get me wrong, the camera is rather good in this game, but learning to get those jumps to the swinging vines correct takes a little time, unnecessarily.

There are a nice variety of weapons from your bare hands to axes to slingshots to vary the gameplay quite well. But in close situations, you will most likely resort to non-weapon combat if the puzzle or battle doesn't require a specific weapon.

The puzzles unfold in an Indiana Jones fashion. You find this dusty lever to open a cage revealing this certain stone, which is the key to opening this door, etc. Overall the puzzles are incredibly easy, but put together nicely. There is little reward beyond the said Jones-ish atmosphere.

Even though there is a nice variety of weapons, puzzles and locales, the experience doesn't break the "wow" barrier in any way, shape or form. The battling gets to be repetitive and the platforming difficulty remains the same throughout, proving to be a fairly uneven journey.

The sound effects are geeky. The target audience was definitely under 18 and the sound production is geared accordingly. It gets by on a kid's merit for sure, but doesn't have enough going for it to warrant any real award. The graphics however, are pretty decent. The varied locales from jungle to ice to mountains differentiate themselves well. The character models are reminiscent of painted wood carving models and bring a particularly nice flavor to the table. The outdoor environments boast better use of color than the indoors, but overall it's pleasing to the eye.

You are not going to be bowled over by Pitfall. Those of you who grew up with Pitfall will get a nice rush of nostalgia, especially since both the original Pitfall and Pitfall 2 are playable when you unlock them. Like most games, it's a good rental for a weekend, especially if you want to relive the early 80's.