Ah, the first-person shooter genre. So full of wonders, mediocrity and the totally embarrassing. It's hard for a new franchise to come to the table with something so fresh that it warrants a hard look. Painkiller, the new kid on the block, attempts to revive the mindless mayhem we grew up on with the likes of Doom. 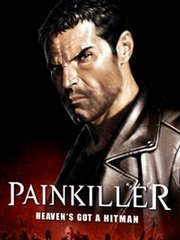 Painkiller does not want to be your next Tom Clancy game. All developer Dreamcatcher wanted to accomplish with the title is prove that totally mindless fragging still has its place among an otherwise "impress-me-with-your-depth" genre. You are not going to get a deep story. You died in a car crash but got stuck in between Heaven and Hell. God needs you to get rid of the Devil's five main generals so that He doesn't have to make a pre-mature move. That's about it. The story is only expounded upon a few more times in the entire game.

Painkiller is about fast-paced action. Mindless zombified monsters, wraiths and apparitions lock on to your location and fire relentlessly at you until you kill them. There are no fancy AI routines. There may be a few moves each enemy sports, but not because of strategy. It reminds me of a first-person Gauntlet. At the end of each chapter, there is a towering, and I mean towering, boss that has a predictable pattern. Unfortunately, once you find the secret spot to trigger or hit on the boss, it's just a matter of time, not skill that leads to its defeat. It is in this moment where you just kinda wonder how much mindlessness is too much.

The weapons are wonderfully crafted. Each of the five has a totally unrelated second function that could be regarded as an entirely different weapon. The stake gun shows off the physics engine with bells on. When you hit an enemy in a particular joint, that joint will fasten to the ground or wall. You can spend an endless amount of time using another laser grappling weapon to flip an enemy into the air and then quickly shooting a stake to pin him in high places. It's truly remarkable. The force of most weapons is always directly related to how far you are away. If you shoot the shotgun from afar, the enemy may stutter. If it's straight in the chest from up close, the enemy will fly with a realistic rag doll effect. The animations and physics models make up Painkiller's finest moments.

The graphics, which use the older DirectX 8.1b, look better than most DX9 games. The draw distance and architecture are fascinating. The character models sport numerous polygons and never fail to impress. Also, even if you have a dated video card, you should get great performance.

The sound is very generic. From the Megadeath-wannabe soundtrack to the recycled moans, groans and explosions, you don't get an audio package worthy of taking a seat by the visuals.

The multiplayer is equally disappointing. Aside from the novel "People Can Fly" mode where you can jump great heights and only use rocket launchers to kill people in the air, the multiplayer levels are sparse, uninspired and feel like an old version of Unreal Tournament. The game code is also more difficult to modify which won't help getting a modding community off to any sort of start.

Even for a pretty frag-fest, it loses its luster over time. Even though the character models may change, the process remains the same throughout. Point to a baddie, click and repeat. Painkiller does do a great job rekindling that old fragging feeling, but it only can go so far.