Onimusha 3 marks the end of an epic series. Garnering much critical praise in its lifespan, Onimusha also captured many a hack-n-slashers' hearts on the PS2. With fine-tuned mechanics and sweeping landscapes, it was one of the PS2's system-defining games. But this time around, the control scheme has changed for the better, the RPG-like bartering system is gone and every background is not pre-rendered. So how well did the Onimusha line say au revoir? 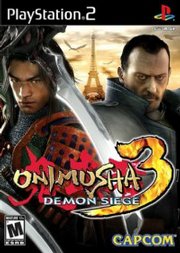 Onimusha's stories have always been complicated and robust but never confusing. That tradition continues from the outset in the opening CG video. As you move on, multiple storylines open up with pertinent amounts of character development. Even the new Frenchman Jacques (played by actor Jean Reno [The Professional]) has his family problems intertwining. And if the gameplay was even half as awesome as the opening CG, this game would, well, flat out rule.

So you get to control both our classic hero Samanosuke and Jacques who each have their separate abilities. Samanosuke, is great in short range swordplay and Jacques is the long range specialist with his chain weapon. And although it may seem like a button mashing extravaganza at first, that sort of carelessness won't get you very far. You must learn the intricacies of many enemies' patterns while also using your block button liberally and strategically. The puzzle elements are also back. Most of them are the tile puzzles where you must move tiles in the correct order into the one empty tile space to connect a line. While not the most creative of puzzles, they do provide a fun challenge.

The control has finally broken away from the tired "up always moves where the character is facing" Resident Evil garbage. You can roam freely and hack freely. It feels so right for Onimusha. Although the camera is fixed and can get in your way at times, it always shows superb cinema-like angles that are truly pleasing.

The more I played it, the more I couldn't believe how gorgeous the visuals were, especially for a Playstation 2 game. Capcom has learned the hardware well and have achieved mastery on Sony's box. From the colors used to how many particles fly to how the lighting reflects, it's all too impressive. Jean Reno's likeness is wonderfully represented and all of the character models animate smoothly and look great. There are some times of hefty slowdown which is to be expected with this graphical undertaking, but nothing ever really takes away from the overall experience.

The sound is also amazing and clear. The channel separation for the surround speakers is unmatched for Dolby Pro-Logic II encoding. The emotional score and hours of dialogue really round out the package. One weird anomaly is that although the French dialogue is subtitled, the Chinese is not. The Chinamen speak clear English. This juxtaposition is weird and kind of detracts from the flow.

I think one minor thing that makes Onimusha 3 not stand out from other Capcom titles is the presentation of the menus. The same font and layout has been used in many Capcom franchises that it doesn't give Onimusha its own identity almost. Such an easy thing to fix, too. Eh...it's not a big deal but it is worth mentioning.

I liked Onimusha 3 a lot. It's a great way to end the series. It's not just an excuse to make money off of the name. Much has been overhauled for the better. What results is a great action-packed ride. Sure, many action games grace the shelves, but why fly cargo in a puddle-jumper when you can fly first-class on a 757?