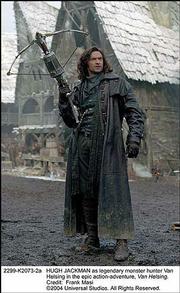 One wonders if modern audiences even realize there was a time when horror films didn't rely on special effects.

"Van Helsing" is part of the same Universal Pictures outfit that launched the iconic cinematic versions of "Frankenstein," "Dracula" and "The Wolf Man" in the 1930s and '40s - it even prominently features these characters in its plot. But the movie is so conceptually removed from these predecessors that it's comfortable raiding from any source to cobble together its story.

That's not entirely a bad thing for "Van Helsing," an often slick and rarely boring monster movie. It's just that the project is so very much a product of 2004.

It's far too reliant on CGI effects for providing its thrills. And its production design seems to dominate every frame. The $150 million film is so visually overbearing that it makes one long for the days of matte paintings and rubber masks.

"Van Helsing" sure starts promising, though.

A black-and-white Universal logo slowly morphs into a torch held by a member of an angry mob. The pitchfork-waving crowd is storming the castle of Victor Frankenstein (Samuel West) as he is giving birth to his undead creation (Shuler Hensley). Only in this version, the mad doctor is under the thumb of Count Dracula (Richard Roxburgh) who needs the monster for his own purposes.

A showdown at a burning windmill momentarily interrupts that plan.

Then it's off to 19th century Paris a year later, where Gabriel Van Helsing (Hugh Jackman) is pursuing the nefarious Mr. Hyde across rooftops. The Vatican has turned the wily Van Helsing into its enforcer when dealing with the minions of evil. Like James Bond, the hunter is armed with the most up-to-date gadgetry available, from rapid-fire crossbows to spinning saw blades. (Give some props to the props department for dreaming up this stuff.)

For his next mission, Van Helsing is sent to Transylvania in order to stop Dracula's plans of using Dr. Frankenstein's experiments to reanimate thousands of his vampiric "children."

Soon the opposing forces are on a cross-continent trip to ... well, that's not exactly clear. But there are plenty of prolonged fights to take one's mind off the splintering subplots.

For whatever reason, this is the first movie starring Hugh Jackman in which he doesn't make an impression. In past pictures such "X-Men," the hunky Australian displayed more charisma in one claw than he does throughout "Van Helsing."

His "part murderer/part holy man" character is just so difficult to latch onto. Is he brooding? Is he a wiseass? Is he conflicted about his past? The film never decides.

Oddly enough, it's Kate Beckinsale who stands out most playing the last surviving member of a Transylvanian royal family. While this fellow vampire killer's connection to the overall plot is convoluted to be sure, the actress is athletic and sexy and her "Lugosian" accent never slips.

Admittedly, audiences aren't likely to attend "Van Helsing" for the humans. This is all about the monsters - and there are at least as many creatures in this flick as there are dinosaurs in "Jurassic Park."

Along the way this leads to some engaging images.

In a deft bit of digital manipulation, the werewolves in the film have a peculiar habit of tearing off their skin to reveal their furry side when undergoing a moonlight transformation. Frankenstein's Monster also gets some laughs by having his spare parts (from 11 different corpses) become detached at various points.

In addition to the marquee monsters, there are some fanciful fight scenes involving Dracula's brides, who can transform into winged harpies capable of strafing human targets like World War I fighter planes.

(Director Stephen Sommers chooses not to include Universal's other franchise character: the mummy. How ironic, considering Sommers crafted the recent updatings of "The Mummy" and "The Mummy Returns.")

Again, none of these things add up to much, other than a mildly diverting blockbuster. "Van Helsing" tries to have fun making a monster mash out of the Universal catalog, but it only emphasizes why those classics stand the test of time and this garish modern enterprise already has one foot in the grave.