"I wanted to grow a new kind of music here," he says, "and I can see it beginning to happen." 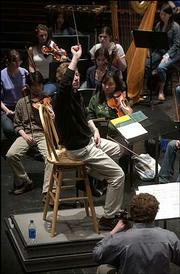 Nicholas Uljanov, director of orchestral activities at Kansas University, rehearses with the KU Symphony Orchestra at the Lied Center. The group prepared last week for their spring concert, which is at 3 p.m. today. Uljanov is completing his first year as director.

Uljanov, wrapping up his first year as director of orchestral studies at KU, says today's season-ending KU Symphony Orchestra concert is another step in reaping his long-term harvest.

"This concert will show some of our progress," the wiry conductor says. "I think we have done very well this year."

Uljanov arrived in Lawrence last August, fresh off a plane from his home in Salzburg, Austria. The energetic maestro remembers having little time to adjust to his new surroundings: University classes began the same day.

Steven McDonald, assistant director of the orchestra, says Uljanov won students over with his "tremendous musicality."

"It is difficult not to respond to him when he is conducting," McDonald says. "He really draws his players in."

"I do my best," Uljanov says, smiling.

Uljanov says his primary goal this year was to increase the orchestra's visibility on campus and in the community.

"It has been a challenge," he says. "There are many things competing for attention here."

The conductor hopes to conduct a survey in the future to determine what would help draw larger audiences to orchestra concerts.


"It is a shame to see the beautiful (Lied Center) not full," Uljanov says. "I hope to find out what people are looking for and how we can meet those needs."

As for the orchestra, Uljanov has been pleased with its progress. The group is composed of both music majors and nonmusic majors, which presents a unique challenge.

"We have many different levels in the orchestra," Uljanov says, "but I think we have been fairly successful in finding a meeting point between everyone."

McDonald also says the orchestra has improved in discipline, rehearsal attendance, performing together as an ensemble and "playing beyond the notes on the page."

"The goal is always to get to the point where you can just make music and not worry about your fingers," he says.

Uljanov says he hopes to continue building the size of the orchestra -- it currently has 70 members -- and to one day take the group on tour in the United States, Europe and beyond.

"I want people all over the world to associate great music-making with the KU Symphony Orchestra," he says. "It is a big goal and one that takes time."

For now, the orchestra is focusing on its final concert of the year. The program this afternoon includes Tchaikovsky's elegant fantasy overture, "Romeo and Juliet," Schubert's "Unfinished Symphony" and Mussorgsky and Ravel's colorful masterpiece "Pictures at an Exhibition."

"It is a wonderful selection of music," McDonald says. "All the works are standard, and for people not familiar with classical music, many of the tunes -- especially in 'Pictures at an Exhibition' -- will ring a bell."

Uljanov also encourages music lovers to mark their calendars for Oct. 12. The KU Symphony Orchestra will celebrate its 100th anniversary with a special concert that evening. Stanislav Ioudenitch, Park University associate music professor and gold medal winner of the 2001 Van Cliburn piano competition, will be a guest soloist.