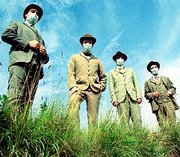 Liverpool's Clinic is on their way to Lawrence to bring their brand of surgically altered pop music to The Bottleneck. Walking a scalpel's edge between garage rock (whatever that is now) and horror movie soundtrack spookiness, Clinic operates (hee hee) on their own plane, and may soon put Liverpool** on the map. lawrence.com spoke with Clinic frontman Ade Blackburn about masks, radiology, kimonos, Radiohead (a lot), and lazy critics.
**Liverpool is in England

lawrence.com: Am I interupting tea?

Ade Blackburn: No, no. It's alright.

You can continue on while we talk if you'd like.

No, I had a little tea about an hour ago, so I'm fine. No problem.

Well, thanks for speaking with me. We're looking forward to your visit to Lawrence, Kansas. Have you been here before?

No, I haven't. No. That's what we're sort of doing this time, playing places we hadn't managed to touch on before, so it's completely new to us.

Well, you're in for a real treat.

'Cause we love the Clinic all up in here.

You went in kind of an Asian direction for a time, didn't you?

That's right, yeah. We played in Japan and we had these sort of - they weren't straight kimonos. It was sort of a bit of a twist on it. But in that type of gown-type of sense, quite a few things seem to fit well with the masks because they're like surgical gowns. We've added a few different accessories to it along the way.

Will you be adding any flourishes for the U.S. tour?

Well, I think compared to previous shows, as well as just surgical outfits being different, I think this time we've got slightly more outlandish projections as well to add like a different visual side to the show. And this sort of neo-like holograms with more like optical illusions, which we've dug into quite a bit, so I think it should be more psychedelic, I suppose, in that sense.

Are you wearing a mask right now?

At the smaller venues that you play, where you're potentially mingling with the rabble before and after the show, do you walk around with the masks on or do you have to stay out of sight?

We wear the outfits for quite awhile before we play just to kind of get into the feel of it, and also afterwards as well. We've played shows before where it's been really close up with the audience, so we walk in through the audience onto the stage, and I actually think, in many ways, that that kind of suits us to play like that because it's more immediate and so it's more of a punk type of setting. So we're well used to that.

(laughs) No, no. We've got one of our friends who tours with us who is a licensed physician. He does a lot of radiology work, so he keeps us well.

And the masks don't hinder your playing and singing?

Myself and Hartley, who plays a number of different instruments, when he plays clarinet he has a tear in his mask so he's able to play, and the same for me, sort of loose rips in the mask to allow yourself to breathe through.

How irritating is it to tour with Radiohead?

I actually found it very easy to tour with Radiohead just because the whole setup between the band and the people that they work with is just easygoing; perhaps a lot more easygoing than smaller gigs or other support kind of situations we've been in, because I don't really think they've got anything to prove so there's no egos involved.

So there aren't legions of robotic fans screaming, "Who is this band that is preventing us from seeing Radiohead?"

(laughs) We kind of saw it as more of being the obvious underdogs, and [since] people were mainly going to watch Radiohead, we had nothing to lose. And I think the Radiohead audience -- as well as some people being kind of aware of what we'd done -- I think they're an intelligent audience, and they seemed pretty open to what we were doing, so it wasn't a case of being bustled offstage.

You've been called Radiohead's favorite band. Has this brought people out of the woodwork to kiss your asses?

Playing with Radiohead certainly, I think, made our name known, especially to people in America. As I say, with that type of audience, I think if they thought what we did was crap, then they'd soon pass on it, so I think that can get your initial foot in the door, but you have to prove yourself after that.

I think my favorite band is the Electric Eels, the kind of proto-punk band from Cleveland who operated in the mid '70s.

Do you think music reviewers draw from some sort of comparison database and basically write one review between them, or do you really think you sound like Can, Wire, Velvet Underground, Ennio Morricone, and Laurie Anderson?

(laughs) I think a lot of the time it can seem lazy, the reference points people have with something. And also even that mania to have references to other bands rather than just describe something for what it is in itself. For instance, with playing with Radiohead, I think that then made that an easy comparison for people to make, whereas I don't think that the bands sound alike, so for me, with a lot of journalists it's a case of trying to make their own lives easier.

It's all finished. We're really pleased with it. I think compared to the last album it's quite fun sounding. It's quite playful with some of the instruments, and it's got a strong sense of humor to it. We're really happy with it.

The title of the album is "Winchester Cathedral."

Any standout tracks you want to talk about?

The first single off the album, which is called "The Magician," is, for me, one of the more - it's got like a sort of Arabic hook on the clarinet to it, and a strong, pulsing rhythm to it. That's one of our favorites, and when we've played that live so far, the people have really picked up on that.

Will we be hearing a lot from "Winchester Cathedral" when you get to town?

It's gonna roughly be half and half. We're aware people still want to hear things they're familiar with, but we also want to try out new songs, and I think that's essential, really, to keep things fresh.

And the instrumentation is more playful, to use your word, than on "Walking with Thee?" Because that record certainly had a very active sound to it.

I think so. Because I think on "Walking with Thee" we had the diversity with the instruments, but had amore eerie, atmospheric feel to it, whereas I think this album, when I say playful, is almost more of a party feel to it, perhaps more upbeat and less mood-based.

When does "Winchester Cathedral" come out?

As I say, we fly tomorrow to start the set of dates, so we're just looking forward to it starting and getting into the swing of it.

Well, just don't try to smoke any cigarettes while you're here.