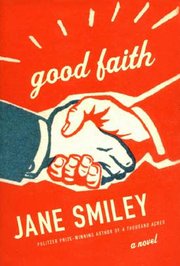 Jane Smiley's latest fiction, "Good Faith," transports us back to a time where Americans are getting filthy rich and loving every penny of it. Set in the 1980s "Good Faith" captures a feeling of opportunity -- there was wealth to be had if you were quick enough and smart enough to get it.

When the book begins it is the early 80s and things are going fine for Joe Stratford. Middle-aged and recently divorced, Joe works hard as a realtor and is rewarded appropriately. Joe claims to have no desires; he has plenty of money and no wish for companionship. This "average Joe" is content with finding homes for his clients and feels satisfied when he makes a fair sale. He has his own family, consisting of two ultra-Catholic parents, and the Baldwins, a surrogate family that treats him as one of their own.

Joe's complacency begins to unravel when he meets a man named Marcus Burns. Marcus, a former IRS officer, wants Joe to undertake a massive development project with him. The multi-million dollar scheme includes buying a large chunk of land and turning it into a golf course with luxury homes. Marcus' opus requires all of Joe's time and much of his money, but his new friend is so charming that Joe barely hesitates.

Joe abandons his old job and throws himself into the new project. As the years pass it becomes clear that things aren't going exactly as planned, but Marcus' charisma and confidence always seem to pacify Joe. Eventually things come to a head in a somewhat predictable but still astonishing ending.

Although somewhat bland, Joe's inert character becomes one of the most interesting points of the book. In first half of the book Joe is strikingly similar to Nick Carraway from F. Scott Fitzgerald's "The Great Gatsby." Just as Nick with Jay Gatsby, Joe's stories revolve around the lives and actions of others (primarily the Baldwins). Although considered a good friend, Joe often seems detached from the emotions that usually accompany strong relationships. Joe latches on to other's happiness but seems to have no yearning for his own. Although he often has opportunities to right a wrong, or set a misunderstanding straight, he instead remains passive.

Of course, all of this changes when Marcus enters Joe's life. Marcus wins Joe over with his money-making schemes and encourages him to change his business style. If the text is read astutely, it is possible to pinpoint the exact moment when Joe changes from an honest, trustworthy person, to a scumbag who will sell his soul for a good deal. After his first lie, midway through the book, things begin to snowball as Joe gives up on any morals he might have had.

Naturally, there is a certain amount of dramatic irony involved in the plot. While it is clear that something is not quite right with Marcus and his lofty ideas, Smiley never paints him as a pure con-artist. Instead, he is like any good villain -- sneaky and persuasive, guarded yet at times vulnerable. Marcus (clearly portrayed as Satan) is crafty in his rhetoric, but Joe offers little resistance.

Most of the book works, although there are a few weak spots. Smiley's male narration is unsettling at times. There are points when Joe seems overly feminine, such as when he details what sort of outfits everyone wears to a town meeting. But at other points Smiley goes too far to portray Joe's manliness, like the love scene where he becomes obsessed with his own penis. Interestingly, this androgyny almost works with Joe, who seems ready to be molded into anyone.

"Good Faith," like all well-written novels, can be read in a number of ways. On the one hand, it is an account of 80s opulence gone awry. On the other, it is a modern Greek tragedy that seems doomed from the start. Broader still, "Good Faith" has biblical implications, and might be read as an interpretation of man's fall from grace.
Whatever it is, "Good Faith" is proof that Smiley's talent is still going strong.